The Flexibility of the Word 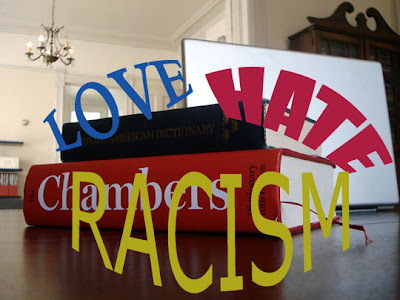 There are certain words which mean different things to different people, and others the meanings of which can be, and are, adapted to suit the purpose and agenda of those speaking them. Love for instance is a word that can mean many things. Through the ages scholars and poets have pondered on the meaning of love, the forms which it can take, and whether it means something different to a man than it does to a woman.
It is only really in the twentieth century that the word love, or at least one form of love began to be given an entirely different meaning. For the first time ever there became circumstances where it has become possible for the act of love to be called hatred. In fact, it has not only become possible for certain forms of love to be called hate, but they now routinely are called hatred.

To love one's country, to love one's people and to love one's culture is now to risk allegations of hatred, unless your form of love willingly contemplates and indeed welcomes the surrender and eventual destruction of that which you most cherish.

It is as if by merely wishing to preserve and protect your own kind, you must necessarily also seek to harm and destroy others, and yet it even goes beyond that, were I to declare the wish that every race, culture and people should be preserved, protected and cherished, I would still, in the eyes of many be guilty of hatred were I to then include my own race, culture and people among those to be preserved, protected and cherished like the others.

To claim one's own culture is of equal value and equally worth saving as any other, is now seen as a cruel act of aggression against those with whom you you claim equality.

It was not always like this. To our forefathers, patriotism and the love of one's own race and people were once viewed as being among the highest and most noble forms of love. They are, now to many viewed as the most despised forms of prejudice and bigotry.

Love of ones country, ones culture and ones people is only accepted as anything other than hatred if all three are viewed by the lover as being fluid, inclusive and ultimately disposable.

You and I might might question how it is possible to love what one would willingly, gleefully even, not only see destroyed but actively conspire at its destruction, but, as ever, it is not you or I who determine these things. To those who do make such definitions, it matters not that we hate no one, it is what and who we love which renders us guilty of a hate crime.

Within this parallel universe into which we have somehow tripped, love can be a form of hate, hate a kind of love, and in this respect, both, of course, are racism.

If you thought Love had many meanings, that little word racism has infinitely more.

Who can forget the full bodied black lady in Craig Bodeker's excellent film “A Conversation About Race” who, when challenged to explain what she meant when she insisted she saw racism "around her every day" stated that it revealed itself when white people were “too nice” to her. Hence apparently racists can be simultaneously nasty, and too nice, or, at least, that's what they can be if you are desperate to find them.

In a recent article in the Chicago Sun Times an African American writer called John W Fountain details his objections to being addressed as “Bud”, which, as I understand it is the American equivalent of the Anglo/Australian term “Mate”. To Mr Fountain, oblivious apparently to the fact that in vast swaths of blue collar America just about every male is known as “Bud”, the term is a post-racial form of “boy” used by racist white Americans who can not bring themselves to address a black man as “Sir”. Mr. Fountain's article goes some way to proving that, as many have long suspected that the real meaning of “racism” can be just about anything that an over sensitive black man wants it to be.

It is also possible to be racist in respect of areas where actual race does not even enter into the equation. For instance as we have seen very recently conservationist have been accused of racism for merely seeking to protect a native species from an alien one. Even efforts to control a troublesome pest can be met with similar charges if, as I explained in a recent posting, that pest is not a native one.

Calls for the use of proper language have resulted in cries of racism as have intelligence tests which too many minorities fail to pass.

A sexual preference can be racist, if one only attracted to members of ones own race, at least that is what many young girls are told.

Serious discussion of immigration has been all but taboo in British politics for years, as the subject is infused with potential racism, and anyone expressing anything other than pompom waving delight at the arrival of the annual half million new residents, is instantly tarred with the dreaded “R” word.

Racism is mentioning the fact that ethnic minorities commit a disproportionate number of crimes without insisting that crimes, such as gang rape, honour killings and shooting someone because they disrespect you, are the fault of social deprivation and racist white society.

As we have seen in the last week from the outcry following the release of a couple of YouTube videos in which someone with a camera did nothing more than walk through a couple of London boroughs filming what they saw, racism can be no more than revealing the truth.

Of course, ultimately that is the main point isn't it?!

We exist in a world where love can be hate, hate can be love, and racism means anything the establishment disapproves of.

Some may say the world has gone mad, but I resist that assessment, although it may not be entirely sane the new language is viciously calculating, brutally cynical and single of purpose.
Posted by Sarah Maid of Albion at 13:34

Sarah, I think the only response to this is for each of us to say, YES, I AM A RACIST. NOW, WHAT ARE YOU GOING TO DO ABOUT IT?

I refuse to live my life worrying about the fact that someone else might think I am a racist. I don't really think I am, but if they wish to think so, I do not care.

I know that I can definitely tell differences between races (on hte average, blacks can run faster and jump higher than whites, whites are considerably smarter than blacks, etc.) based on things that I have seen throughout my life; I know these things to be true. I don't think it is racism to acknowledge the truth, but I will not worry about it if someone else thinks so. Being able to make the distinctions is very helpful in avoiding doing foolish things; the majority should try it sometime and see just how wonderfully well it works.

Stupid is as stupid does. To insist that something is what it is not in the face of all evidence is simply marxist stupidity.

It is a shortened form of "Buddy" which is derived, I think, from "Brother." It is commonly used in impersonal address in the US, such as yelling at someone in traffic, "Hey, bud, move along!" John W. Fountain should be grateful if he is not called much worse than "Bud."

Not only do I think you are right that we should cease bothering whether we are called "racist" I do not think it is possible to avoid it. The term is now so broad that no white person who does not habitually carry an anti-racist placard and wonder around chanting "Blacks are best" could live their life without doing or saying something someone would deem to be "racist".

In any e4vent it is an entirely dishonest word invented for the purpose of bullying and intimidating people in order to achieve a political goal.

Although I don't agree with much you have to say here Sarah, I think this is one of your best posts and you make some good points. I do agree that the term racism has become overused and stretched to mean some things that it should not.