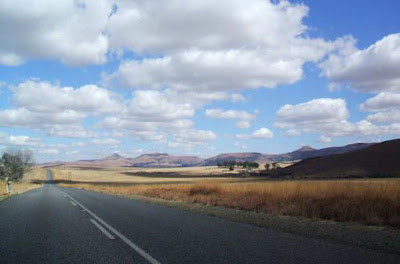 When I checked the news sites this morning she remained unidentified, a young blonde woman aged in her late teens or early twenties. From what remains of her clothes she seems to have been smart and well groomed, she had manicured nails and coloured highlights in her hair, she apparently cared about her appearance, and was probably pretty.

She was found on Monday on a road side in the Vaal Rand, not far from from Johannesburg. She had no identification, her body had been set alight and she was burnt beyond recognition. Early post mortem results suggest she may well have been alive when first set on fire, and who knows what horrors she lived through before that final agony.

She was killed not long before she was discovered, as smoke still hung in the air when a passing motorist went to investigate what was burning and found a horror which will no doubt haunt him. No effort had been made to hide the body and car tracks were found near the scene.

She is someone's daughter, maybe someone's sister, but nobody has yet reported her missing. Perhaps they are travelling and do not know she is gone. Maybe it was she who was travelling and those who love her are in another country awaiting her call, three days is not long to go without hearing from a grown up child on holiday.

Whoever she is, and wherever she comes from, she will become another statistic, if she is even recorded at all, the South African police are not that fastidious when recording violent crime, especially against whites. News of her final suffering will be reported briefly, but, unless she is a tourist, only in South Africa itself, portrayed as if it is a rare aberration rather than the routine, every day brutal murder that it is. She will be mentioned again briefly, if her killers are caught, but they probably won't be, so few are. Then she will be forgotten, cast into the void of the unmentioned, together with all the other young lives prematurely snuffed out in terror and in pain to feed the depravity of brutal men and crimes unacknowledged by a dishonest world.

Your very able words well capture the sentiment needed and softly lays them to print - this woman was loved by someone.
She is not a mere statistic.

I fear that as numbers have climbed, in SA and elsewhere, that grief and anger is reduced into insensitive numbers.

One wonders when the pent up dam will overflow. Will it be a single incident that ignites the long awaited retribution to come ?

Will we continue to appeal to those who obviously care not ?
We know the blacks talk of the night of the long knives (uhuru) when Mandela kicks the bucket - what's our boiling point ?

I call on the Boers to defend themselves by reporting the Genocide being perpetrated against them.
Go to www.genocidewatch.org you can leave a message there.
Or Email them on genocidewatch@aol.com
Please I need as many of you to do this as possible we must inundate their in box with our emails. Send your personal accounts so that they can be logged as much detail as possible is needed. If you have photos as graphic as possible to shock them into action.
Please stand together.
“Friend of the Boer”

I call on the Boers to defend themselves by reporting the Genocide being perpetrated against them.
Go to www.genocidewatch.org you can leave a message there.
Or Email them on genocidewatch@aol.com
Please I need as many of you to do this as possible we must inundate their in box with our emails. Send your personal accounts so that they can be logged as much detail as possible is needed. If you have photos as graphic as possible to shock them into action.
Please stand together.
“Friend of the Boer”

Words from Tim Tyson which were said about the Duke Lacrosse case (which does not feature on his wikipedia page).

At least one part is true of this forgotten victim of a real as distinct from fictitous crime.

And there is a disgusting reason why cetain people are fogotten victims.