A flawed prosecution - for the sake of balance? 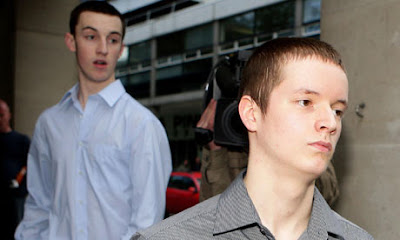 Ross McKnight and Matthew Swift - cleared by a jury in 45 minutes
Whoever decided to take this case to trial needs to be sacked. Anyone who seriously believed that 16 year old Ross McKnight and Matthew Swift, 18, were actually plotting a Columbine style massacre at their school in Manchester, on the strength of some childish fantasy, a gas mask an some blurry mobile phone film of firecrackers, should not be working for the CPS.

However, they will not be sacked for they are only carrying the instructions of those above. This case was brought for one reason and one reason only, and that was to show Muslims that we don't only prosecute Muslim terrorists.

I believe that the motives behind this trial were very sinister and that this was nothing more than a balancing prosecution designed to demonstrate that white non-Muslims are also plotting acts of terrorism. If our leaders had their way two imaginative teenagers would have been sacrificed for the sake of that demonstration.

They are not the first, we have already seen one, admittedly rather peculiar, so called "White Supremisist" being sent to prison on the basis that he possessed some tennis balls and a book about the Waffen SS. They certainly will not be the last, whilst the threat from Islamic terrorism continues, non-Muslim white citizens will remain at threat from similar contrived balancing prosecutions, it is the nature of the regime which currently rules us.

I shall write more on the subject of balancing prosecutions at the weekend, however, meanwhile let us just be grateful that a sensible jury saw through the ludicrous case they were presented with, and welcome the fact that two innocent young men are free. Be in no doubt had those in power and their controlled media got their way, Ross and Matthew would not be free tonight.

You can go to prison in the UK for "...he possessed some tennis balls and a book about the Waffen SS"??

It there some connection between tennis balls and the book, or are these separate offenses, since neither one makes any sense at all?

The prosecution argued that the tennis balls were component parts of an explosive device they claimed he was constructing, there was also some weed killer involved I believe, which once again they claimed had the potential to be part of a bomb.

However, there was no evidence that he had managed to construct a bomb, or what, if anything he was planning to bomb.

The fact that he had a book about the Waffen SS was apparently used to prove that he was a bad person.

Oh, for crying out loud, Sarah! I've got some tennis balls in the basement, about five different flavors of weed killer out in the garage, and a whole book shelf full of books on WW II, Nazis, etc. Is the CPS going to come after me too? Please don't tell them where I live!

I really do know how to make a bomb, although not with that stuff.

Jacqui Smith will put me on the banned in Britain list, along with Michael Savage now. Its a good thing the UK only admits reasonable people like radical muzlims!

I've got a book about the Waffen SS, published by Osprey. It's got some dynamite (no play on words intended) info. about the 13th Hanjar and 21st Skanderberg Muslim Slav Waffen SS Divisions, recruited from Albania, Bosnia and Kosovo.

They were noted for high rates of desertion, extreme nervousness in the face of determined opposition and sickening cruelty to unarmed civilians.

Anyway, Sarah and Dr. D., you can read online about the Muslim Waffen SS here, if it's not an arrestable offence.

Ha ! Thanks for the "tennis ball violation" clarification !

My hound dog has quite a few out in the yard and I'd hate to think of her having to take it on the lam on account of them (she carries a knife though). :)

But Alanorei, it seems that it the combination of that dangerous literature with tennis balls and weed killer that excites the CPS!

My great fear is because I have all of these things in my home, even if I am somewhat outside the usual jurisdiction of the CPS. If we get the global government that seems to be just around the corner, they will just issue a writ for my local police to come and arrest me here in Iowa to bind me over for trial in London. Brave New World!

Re: global arrest warrants, you are right, Dr. D., unfortunately.

The European Arrest Warrant is basically meant to work like that. It's a step in the process of setting up a global concentration camp.

There is no doubt about it these boys were being used to make a political point, so in future when people complain about the muslim terrorist threat, the left (and the muslims) could hold up these two as some sort of example and pretend it is not only the muslims that are capable of terrorism, i bet they were so disapointed when they were acquited.

They must wish so much that white British people would commit acts of terrorism so they can make the muslims feel alot better about themselves, also Sarah i think when these type of ridiculous cases do come before the CPS, they will have been rigerously investigated by the politically controlled police see if there is any connection what-so-ever to the BNP, you know, the accused once new someone who used to have a brother who once passed a BNP member in the street, not quite but you get my point? I wonder if they'd mention it if was found that the accused was a paid up member of a Communist Party?...Donna