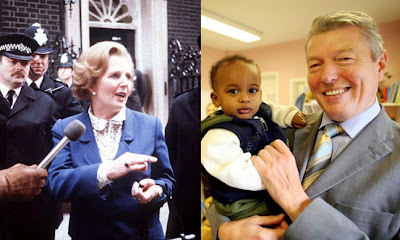 I see that my friend the Green Arrow has already commented on Home Secretary Alan Johnson's speech at the Royal Society, in which he appeared acknowledged that the Labour government, together with successive previous governments have handled the issue of immigration badly. The Green Arrow is of course quite correct to be sceptical of ex-trade union leader Johnson's apparent Damascene conversion, this is after all the man who, as the Green Arrow points out, said only four months ago that he was more than happy living in a multicultural society, and, famously that he did “not lie awake at night worrying about a population of 70million”.

We would, of course, be mad to believe that Johnson is doing anything other than seeking to deceive the public in the hope of reducing the potential vote for the BNP. For a senior member of the current government to claim that they are no longer in favour of mass immigration is as credible as serial rapist declaring that he has gone gay, their past record exposes their lie.

We will hear more of this, more leading members of the government will start expressing doubts over past immigration policy and be in no doubt, the Conservatives will follow suit, in fact we might even here similar rumblings from the Lib Dems if they get desperate enough, However, that is all it is, desperation. They do not mean it, it is a lie which they have absolutely no intention of carrying forward. Their sole purpose is to deceive the public.

Of course, we have been here before, the last time that our politicians were forced to address the subject of immigration during the months leading up to an election, thirty years ago, in 1979.

Usually, all political parties comply with a secret pact whereby none of them mention the subject of immigration before an election, because they all have the same failed policy, and they do not want it discussed. However, this time, the growing popularity of the BNP, means that they have no option other than to address the subject and start lying through their expensively capped, tax payer funded teeth.

Voters over 50 will have seen this before, in the lead up to the 1979 election, the then opposition leader Margaret Thatcher gave a famous TV interview to the “World in Action” program during which he alluded to the fears in many communities that they could become "rather swamped by people of a different culture".

Thatcher was widely condemned by the, even then controlled media, for using the word “swamped” but she used it deliberately, and as cynically as Johnson used his words at the Royal Society.

Like Johnson, Thatcher had no intention of changing immigration policy, but she fooled enough people into into believing she would, that they voted for her, rather than the National Front and she won with a majority of 43 and the rest is history.

The BNP is not the National Front, but the issues and the Lib/Lab/Con troika are the same. as they were in 1979, just much worse. Do not let history repeat itself, do not be fooled again.
Posted by Sarah Maid of Albion at 12:55

Well I'm over fifty and remember it all. I remember the propaganda masquerading as entertainment on the BBC's "Till Death Us Do Part." Where the old guy who opposed immigration was presented as a racist ignoramus while the young cool guy welcomed the multicultural future and scoffed at traditional beliefs.

Oddly enough I don't remember any main stream political party ever raising the issue of immigration at an election - ever.

I don't remember it either, I was nine! :-)) However, going by the historical record, it was the only time a senior politician has mentioned immigration near an election in the last four or five decades, until now.

I was lying in my bath and thinking maybe it would have been better if Germany had invaded the Uk instead of the third worlders.

It was only 2 years after her "pweople are being afraid of being swamped" statement, in 1981, that Conservative party group, The Monday Club, announced that its official policy was to repatriate 50,000 a year. Mrs.Thacher quickly assured Asians that they have a right to be here!

Sarah, completely off topic for a moment. UG from SA Sucks has been arrested. One more step towards the slipperly slope of chaos that SA is heading towards.

On topic, have you noticed how main stream politicians are now "making a stand" on some of the policies that the BNP has had for a while? Lies, damn lies, anything to get a vote. They're running scared. I like it!

I have i guess followed the mind control since 1961 day of my birth, and becoming a 'lefty' liberal went o leftie college and suddenly in the last year or so have awakened to the horror, the horror

You are not alone, I was once a staunch Tony Blair supporter until just a few years ago, when I finally began to see what was actually happening.

Guy who played Alf Garnett is a staunch Labour supporter.