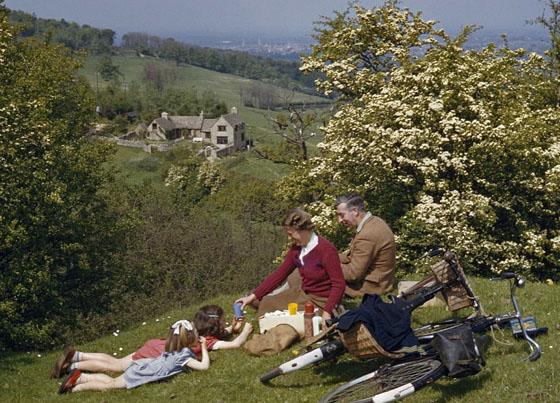 An English family picnic in 1952

When the BBC and others show us photographs and film of life in Britain before the never previously experienced levels of mass immigration which has so changed our society, they invariably, and I am sure deliberately, show us dull black and white photographs and film all of which make Britain appear a drab, austere and generally unappealing place to be. However, as the picture at the top of this article and these pictures from Saturday's Mail online suggest the truth was somewhat different.
As means of comparison, here are some pictures of modern Britain which have received the treatment which the BBC applies to our past - suddenly it doesn't look so "vibrant" does it? 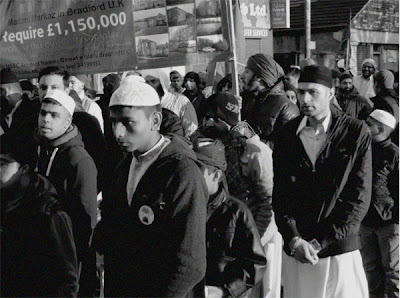 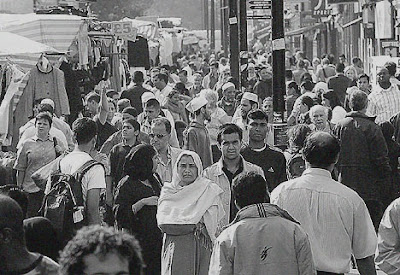 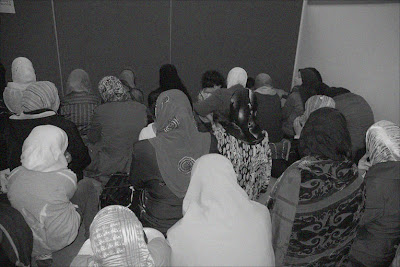 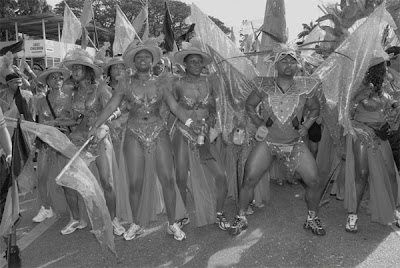 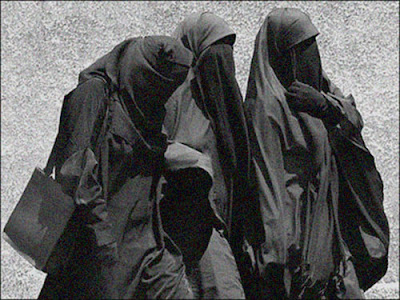 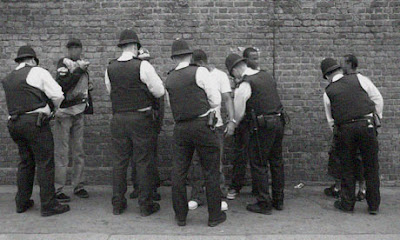 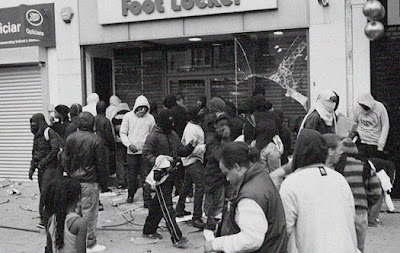 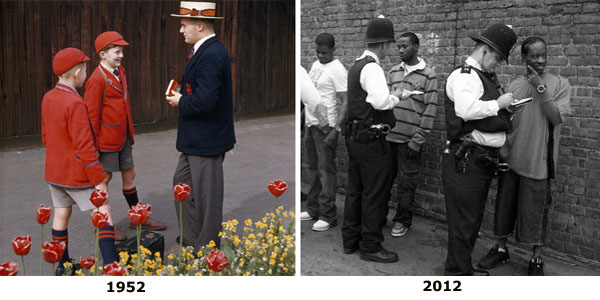 Schoolboys and authority figures - then and now

These pictures are evidence of a crime against humanity. What has been done to our country in just 60 years really is as shocking as it is diabolical.

Unfortunately, the monarch at the centre of these jubilee celebrations has not spoke out even once in defence of her people from this disastrous rainbow social experiment.

What a betrayal of those who gave their lives to defend freedom. What their country has become is most definitely not what they sacrificed so much for.

Fascinating. The parents in the first picture are fairly old, and have two children- a sign of the healthy delay of family formation and restriction of family size. The Africans and Asians in the other pictures no doubt all come from large families started almost at the age of sexual maturity.

Turning their own tactics around to be used against them is a splendid method of opening the minds and hearts of truth seekers.

Those were the days, my friend. Yes indeed they were. The people are so easily led though; for example, Ted Heath conned the masses quite easily in the seventies and led us into Europe on the premise that we would have equal trading partners and would prosper peacefully for ever. This was despite the fact that we had our own trading partners within the Commonwealth, people on whom we turned our backs. Now today we have turned our nation into a multicultural hell and there seems to be little dissent because we are hamstrung by political dogma backed by draconian penalties. No offence to Her Majesty, but does it not seem unusual that over a million people turned out in the rain to see her but only a handful of dedicated patriots continually protest about the dreadful state of our country, even in the localities where so called enrichers are raping our children?

Charming and squalid are easily recognized whether in B&W, colour, negatives, or infrared.

Its going to get even more different unless we get a grip.

The Barcelona Process and other EuroMed deals need scrutinising. The EU-African Union is being implemented as I write.

Not too mention Mode 4


Excellent piece on the power of graphics.

Contrast the current one with this great woman.
Queen Elizabeth in 1596, sent an "open letter" to the Lord Mayor of London, stating: "There are of late divers blackmoores brought into this realme, of which kinde of people there are allready here to manie," ordering that they be deported.

A week later, she repeated: "good pleasure to have those kinde of people sent out of the lande" and commissioned the merchant Casper van Senden to "take up" certain "blackamoores here in this realme and to transport them into Spaine and Portugall." In 1601, she again complained about the "great numbers of Negars and Blackamoors which (as she is informed) are crept into this realm," "infidels, having no understanding of Christ or his Gospel," and had them repatriated.

Shame I feel sorry for you guys....only a joke....not for one moment.....hope you get over-run!Crime against humanity? LOL....Your trash queen still haven't apologized for the crimes of the english against the mothers and children of the Boers! ...you pommies were the loudmouths against "apartheid"...maybe now you will understand why!
W Etdo

Thanks for bringing these images to our attention. To give the present-day photos the same treatment as the BBC (and other big media/gov't.) typically give to images of the past was inspired. In fact it is our current societies that are flat, gray and ugly. Our treacherous so-called public authorities bear all the guilt for this condition. All the time they have canted about "democracy" they have put up a stone wall of resistance against the repeatedly and clearly expressed wishes of the people for the invasion of our nations to end. They deserve what they get. We don't.

To the guy who said, "...you pommies were the loudmouths against "apartheid"...": You have every right to be enraged at the sickening betrayal of SA by the UK & the US. But remember that the same back-stabbing, sodomite "elites" who push you guys into the cannibal's pot are the very ones selling us out here, too. If there had really been such a thing as democracy here WE (as opposed to our lying, craven "elites") would not have sold you out any more than we are in favor of what is going on in our nations today. After all, it was the American South that was the trial run for what they are now doing everywhere.

@ Mazzio Hooch my apology for generalizing, there are surely some that stood for our cause, altough did not see or hear about them years ago.. One can't just blame the "lying elite", it is but your people that voted them into power?
At the hayday of anti-apartheid demo's (70's and 80's)...thousands of white englishmen screaming and shouthing for the blood of us "racists" not even a few saying "wait a bit, just maybe they have a point?"
Now these 70's and 80's people are the 50year old ones seeing their country being over-run and complaining! Thus not much sympathy!
W Etdo

Well, we actually can hang a lot of this around the heads of the lying elite: The Ox-bridge bunch and the Ivy Leaguers. It was they and their lesser followers who so piously marched back then just as it is they who so rigorously control the access to power in our societies today. We, the people who see (and experience) the reality of anti-white violence, are given "choices" to vote for, pre-selected, fully vetted and utterly unreflective of the true will of most of our peoples. If the people of the US had their way there would be a wall on the Mexican border and our troops brought home to patrol it. And yet we get nothing. Short of armed revolt the only thing most people can do is vote for the politicians we think will do the least harm. (And didn't a lot of whites in SA vote for the insane fantasy that brought that nation to it's current tragedy?) As tempting as it must be to gloat over the fate of the wicked nations who largely pushed SA in front of the bus we have to remember that once the UK, Europe and the USA are gone (and they are going)there will be no safe harbor for white people anywhere. No white ought to view that prospect with anything but alarm and sadness.

WHAT A F KIN HELL HOLE BLAIR AND THE LIBS /JEWS TURNED YR COUNTRY INTO.

And you deserve it, after what ya did in India and Ireland.

Warsi has been a naughty girl again.

Well, I never. Warsi is innocent. its all because of racism. Interesting comments though.

Sorry for an off topic query. You cannot read Mike Smith's political blog without an invite.I am sure his blog is again being targeted. One cannot enter his blog.

Johannesburg, May 30 2012 - Pres Jacob Zuma's highly irresponsible cabinet-members were inciting a 5,000-strong rent-a-crowd with the genocidal

I think the far right needs to address the historical development of urban gangs during the period of the Industrial Revolution and mass urbanization-- before mass immigration. Europe had severely degenerate classes and subcultures before the postwar mass immigration.

Very good post. The BBC and other mainstream outlets are multicult propaganda broadcasters, dedicated to suppressing reality and rewriting history. (Look at all the heroic negroes they insert into medieval English history in dramas like Merlin and Robin Hood, and in the latest Shakespeare plays). Love your blog.