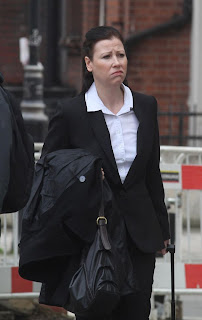 
Back in 2001, Britain’s political parties signed a fantastic pledge. They agreed to say nothing to “stir up racial or religious hatred, or lead to prejudice on grounds of race, nationality or religion.”

This gag order did more than keep the parties polite. Vital issues – from massive immigration and multiculturalism to their eradicating effects on British civilization – were officially banned. Thus, such concerns became impermissible thoughts. Not that such issues weren’t already thoughtcrime, as George Orwell would have put it. But this unprecedented pledge turned “violators” into political lepers.

I thought of that elite code of cowardice this week when a London judge sentenced a 42-year-old British secretary named Jacqueline Woodhouse to 21 weeks in jail. Her crime? An expletive-laden rant about immigration, multiculturalism and the disappearance of British civilization. Not in so many words. But that was the unmistakable gist of Woodhouse’s commentary one January night on the London Underground.

This same week, another London judge ordered two black girls, 18 and 19, to perform community service after a savage physical attack on two white legal secretaries. “I am satisfied what you both did, you did that night because you were fueled by alcohol,” Judge Stephen Kramer said, as though tut-tutting a child’s unknowing apple theft.

A few months ago, another London judge freed four Somali Muslim women who set upon a white couple, yelling, “Kill the white slag,” and other anti-white slurs. The gang beat the woman to the ground and ripped out a patch of her hair. Judge Robert Brown was lenient because, he ruled, as Muslims, the women were not used to being drunk.


Click here to continue reading and then circulate
Posted by Sarah Maid of Albion at 05:58

But it does indeed represent the views of other white people

Unfortunately, the country has been sold off to finance capitalism; this means the people in it too. It's all about 'market forces' as they say.

as a consequence, believe that it secretly represents the views of other white people.”

There is nothing secretive about this at all

More and more British people are "coming out" and telling it like it is about what they see is becoming of the country they grew up in.

The judges, and other liberals, in their ivory towers seem to be missing out on this diversity and enrichment - hence the absurd judgements they are handing down.

Never mind Charlene, Paige, Kriss or Danny. Deploy almost 50 officers to arrest someone for typing words on Facebook that some Jew found offensive. That shows their priorities.

They are trying to stop it blowing up. While the judges are issuing political judgements the police are monitoring thousands of internet users and now the the internet providers have got to. Its getting near the crunch.

They are trying to stop it blowing up. While the judges are issuing political judgements the police are monitoring thousands of internet users and now the the internet providers have got to. Its getting near the crunch.

Why nationalism, religion, class and values are ultimately going to beat liberalism like the wet rage it is.

The importance of belonging - CNN.com
www.cnn.com
You are not alone.

Which jail is is she in so that we can send her letters of support?