As curried as a parakeet 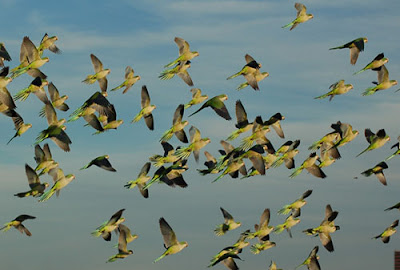 The authorities have finally declared that the growing flocks of Himalayan green parakeets, which have taken over vast areas London, Kent and Surrey in recent decades, to be a pest. The distinctly coloured birds, descendants of a small flock of around twenty which escaped from Shepperton Film Studios during the making of "The African Queen", starring Humphrey Bogart and Katharine Hepburn, in 1951, have thrived, and bred rapidly, until their numbers have now reached tens of thousands and they have become both a nuisance and a threat to indigenous species. (any analogies spring to mind?)

Certainly in the area where I live, they have made their presence known in the parks and local squares, in numbers far larger than the home grown thrushes, blue tits and robins who used predominate. As for the famous cockney sparrow they, rather like their human namesakes, have all but vanished from the London scene, to be replaced by these more gaudy coloured foreigners.

A cull was first muted in 2007, and has recently been given the go-ahead in order to control their numbers. Of course immediately and predictably, so called experts jump up and start shouting the "R" word. According to them, seeking to control the numbers of foreign invaders, or even objecting to the damage they do, is ..... you guessed it,... RACIST.

Once again that, surely now most devalued, word is being used to bully and intimidate people and prevent any attempt to preserve Britain's natural history and it's native inhabitants.

Also, as usual, the same old misleading platitudes are produced designed to demonstrate what our enemies like to present as the fait accompli of a multicultural Britain, the favourite one of which is used here again. The Green Parakeets are apparently now "as British as curry." We must surely have all by now have lost count of how often that trite misleading old saying is rolled out to show how useless it is to complain about immigration. The implication being that merely because a significant number of Britons enjoy a visit to one of the countless curry restaurants, which can be found in their dozens in every town in Britain, on a Saturday night, we have no option other than to welcome millions of migrants from the Indian sub continent.

It might be worth responding to the next left wing mult-culti junkie who comes out with that tired old line, that, per head of population, we probably eat more hamburgers and drink more cocacola than we eat curries, does that mean we should be invaded by America?

Indeed, given that the one thing which more Britains seem to have a taste for than just about anything else is larger, does that we should not not have fought World War II?

Another helping of curried parakeet anyone?
Posted by Sarah Maid of Albion at 09:49

Britains participation in the wars against Germany was stupid.

This video applies equally as well to the UK.


A tale of two societies.

Sarah, are you trying to discurry these birds?