A call to action but is anyone listening? 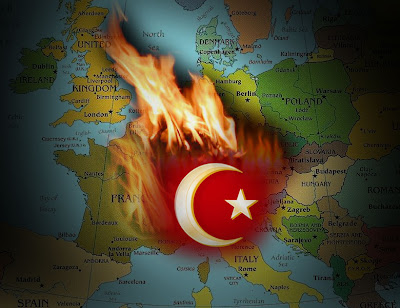 There is a very disturbing video on the Home of the Green Arrow blogsite, which can be viewed by clicking here. It is a terrifying warning about the seemingly inevitable death of our Western culture as it becomes submerged in an apparently unstoppable Islam.

Whilst, across Europe, indigenous populations are dropping in an alarming and potentially irreversible rate, the Muslim invasion of Europe is expected to double in numbers from its current level of 52 Million to 104 million in a few decades (174 million if Turkey joins the EU). Meanwhile in America, the Muslim population, a mere 100,000 in 1970, is expected to exceed 50 million in thirty years. At this rate Islam's eventual dominance of the West within this century seems a foregone conclusion.

Is this to be our fate, is this really how our story will end?

It certainly feels as if we are facing something which has been long foretold, yet throughout history it has surely been assumed that when mankind faced the many headed hydra of the apocalypse we would put up a fight, rather than meekly surrender to the darkness whilst scoffing a pop-tart and and checking it there is something more interesting on the other channels.

Have we really reached such a point? Have those of European origin, a race who have done more good for the people of this Earth than all the others combined, now chosen to make our exit? For make no mistake that is what it means, the end may take decades, possibly centuries, but from this point forward there will be no going back. No prior race in history has volunteered for its extinction, are we to be the first?

Have the Western nations who's people are responsible for almost every advance in technology, science, medicine, democracy and law, those who's art, culture and literature surpasses anything even dreamed of in the world beyond, the people who fought for a better world on the Western Front, Dunkirk and at Iwo Jima and Gettysburg really reduced to this? Has something occurred to emasculate our race or were we always like this, were the British always lumpen, cowards who only ruled the waves because the toffs bullied them into it, as the new breed of toffs now bully them into embracing their decline? The evidence does not support such a claim, but, if not, what has happened?

We are facing the greatest danger which we, as a people, have ever faced, yet it seems as if either we have not noticed, do not care or are too cowed to acknowledge or face it.

We have faced danger before, but this time our foe is legion, and we face a powerful and well organised enemy within. To say that is not to be alarmist. Nobody will now deny that for the first eighty years of the last century, there were those amongst us working tirelessly for our destruction at the hands of Soviet Communism. Communism has gone away, but those who sought to destroy us have not, they have merely moved on to a new and more deadly attack on the West.

It is no coincidence that the growing threat of Militant Islam coincided with the fall of Communism, they are both designed to achieve for the same terrible outcome, but from where we stand today Islam and indeed multiculturalism in general is the greater threat.

Yet we behave as if we are blind to it, when did we become such fools?

We acknowledged the threat of Communism and stood up to that, why do we refuse to acknowledge or stand up to this even greater peril? Thirty years ago, we would have laughed in the face of any politician who claimed that "the vast Majority of moderate peace-loving communists don't want to bomb us into the stone age", so why do we obediently accept such meaningless platitudes when they are said about Islam?

Do we really believe that if we do not speak the truth it will go away? Be assured it will not.

The reality is with us, it is a terrifying reality and it will soon be too late to reverse it. If we do not do something now we are facing the end of our culture, and the eventual end of our people. Before you scoff, do the maths, if this continues, our fate is inevitable. We may survive in beleaguered pockets across Europe, North America and Australia, but the decline will be unstoppable, and have only one outcome.

I am not speaking of a possible future, but of a certainty, if we do not act to change it. Our last chance is fading, if we do not grasp it now we will never again have that option.

Will you grasp the chance, or will you eat another pop tart and change the channel? If the latter, I recommend that you never look your children in the eyes again, for you will never forgive yourself, as they will one day never forgive you
Posted by Sarah Maid of Albion at 02:38

Sadly, when I talk to my children who are your age, Sarah, about this, they say, "Dad, you are boring," and they grab another pop-tart and change the channel. They have their busy lives, their careers, and they just can't be bothered with such things. They do not see this as something of immediate concern to themselves. I am unable to get through to them that it is they and their children that are going to have to deal with the brunt of this; I will be gone before the full impact of it is felt. But they just don't see it as their concern!

when discussing the abdication of one's birthright, one should not forget the referendum that preceeded the first attempt in South Africa to integrate other-than-white persons into mainstream politics

The best thing for white people to do is have many children, educate them properly, (no t.v.?) and encourage them to have many white children.