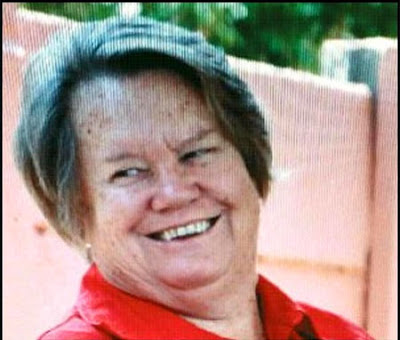 Mrs Marthie Erasmus, 63, killed with a sledgehammer
On the same day as the Potgier family were killed in Lindsay,(see below) Thursday December 2nd, another farm murder occurred in Koster, the centre of South Africa's maze production, situated in the North West Province, a group of armed black males attacked an Afrikaans farm couple on the farm Hartbeesfontein, in the Moedwil district of Koster. Mrs Marthie Erasmus, 63, was tied up on her bed and then the gang bludgeoned the defenceless woman to death with a 16 pound sledgehammer - for no apparent reason.

Husband Chris Erasmus, also 63, was tied to his chair and brutally beaten about the face and eyes. However he survived the attack and managed to free himself after the attackers fled.

Update on the Potgieter family murder 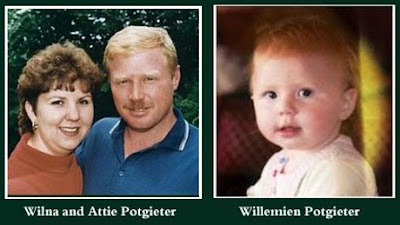 There are varying reports as to how 40 year old Attie Potgieger died, initial reports stated he was attacked with a machete however, it now appears he may have been shot. All reports confirm however that his wife Wilna and the couple's three year old daughter Willemein , pictured above at a slightly earlier age, were dispatched, execution style, with bullets to the back of the head. It chills the blood to imagine what sort of mind can murder a three year old child in such a manner.

Also chilling is the note left behind by the Potieger family's killers which simply stated “We have killed them. We are coming back”.
Mike Smith has written a powerful article about this murder at South Africa Sucks

It was with shock and a lump in my throat that I read the report on the farm murder of the Potgieter family of the Freestate as posted by Knorrig. What sick bastards can execute a three year old girl like that? And then the people come on here and say, “You should not hate”…

Attie Potgieter, his wife Wilna and their three year old daughter Willemien were shot execution style by black savages that left a chilling note, “We have killed them. We are coming back”.

I want to know from the experts who record these farm murders exactly how it will be recorded. Three white people have been killed on a farm. Is that THREE farm murders or ONE seeing that only one “Farmer” was killed. The reason I ask is because there are some people who dispute the figure of 3700 white farmers killed since 1994.

And if we look at what they stole: “Credit cards covered in blood as well as a 9mm firearm, which was also covered in blood, were found in a shack near Lindley. Another firearm was found on the scene.“

Is this Kaffir bookkeeping or what? They pay out R1500 to steal a 9mm that they could have picked up for R150 in the township. They drop a fire-arm at the scene.

The report says: “Potgieter was believed to have withdrawn R7 000 from the bank on Wednesday afternoon to pay salaries.”

No mention in the report that this money was stolen. Only some credit cards…

Which delusional white farmer in this day and age, after so many farm murders still employs blacks? Were the Potgieters also some of those whites who believe that “Our Blacks” are OK. They are not like “The other Blacks”? Well this case has proved again that three of these farm workers worked together with the killers. Now, none of the 30 odd farm workers have a job anymore. Brilliant Black thinking to kill a white farmer and his family.

The report says: “In the house, a plate of food was still in the microwave…”

So these bastards were obviously not hungry or poor when they committed these murders. They had R1500 to pay out as bribes for information of the whereabouts of the farmer. Where did they get that money? Who funded them? It is clear to me that this was as usual no ordinary crime. This is terrorism and the continuation of the ANC’s terrorist campaign which they call an “Armed struggle” against innocent civilians.

A three year old little white Girl shot dead like a dog by black scum…But I am not allowed to hate…I am told that this is not racial hatred towards whites, this is “just ordinary crime”…
Continue reading at South Africa Sucks
Posted by Sarah Maid of Albion at 06:15

This link will prove controversial, Sarah i.e. feel free not to post it but I think it goes a long way to explaining the big picture of the South African genocide.

Rhodesia and South Africa are/were relatively small nations, with white European minorities. I think the same bloodbath is planned for the other WASP nations, with unrestricted immigration as the necessary prelude, in order to tip the population balance against the hated WASPs.

(WASP has, of course, a different meaning in this comment from the literal one before.)

As in the past, we are going to have to look after ourselves effectively.

Alanorei - are you a WASP?

The bottom line is, however, as the vicious, depraved, anti-white racist Desmond Tutu once said when forcasting South Africa's future:

"To have a white skin would be a considerable disadvantage."

What really gets me is that there is no mention of this brutal attack in ANY non-SA paper that I can find, not the Telegraph, not the DM not even the BBC. People will say that this is normal, BUT when Eugene Tere'Blance was killed it was all over the international media. Why? because people could point and say:

"See, he was a nasty nazi-like person, he deserved it. If that is the kind of person being killed in SA, we are actually not bothered about farm murders."

None of the other murders have made it into the international media because you CAN NOT EVER justify the torture and execution of harmless old people or children.

Thanks for putting this information out there Sarah.