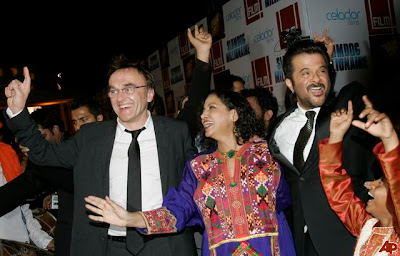 It is hard to contemplate quite how depressing, and certainly embarrassing, the opening ceremony of the 2012 Olympic games is certain to be now that the director Danny Boyle has being appointed to direct the show.

Those who cringed at the pitiful spectacle presented by Britain at the closing of the 2008 games in Beijing might think it couldn’t possibly get much worse than the gangstas and sundry strumpets which tumbled out of a red double decker to represent some Liberal zealot’s lala land fantasy of London, but they are wrong, it will be infinitely worse.

Danny Boyle’s film career is dominated by movies expressing a particular attitude or world view, his 2000 adaptation of Alex Garland’s backpacker eulogy “The Beach” and “28 Days Later”, a post apocalyptic foray through a devastated world where few but the suitably diverse survived, are enough to fill one with foreboding on their own, however, Boyle is even better known for movies such as Trainspotting which followed a group of heroine addicts through the economically depressed streets of 1980’s Edinburgh, and of course every liberal’s must see, must rave over, must vote for heart warming tale of the street urchins of Mumbai, Slumdog Millionaire.

The opening ceremony of the Beijing games may have been over the top but it was a celebration of China, Chinese culture and native Chinese ethnicity. You can rest assured that we, the native British will not be allowed any such thing.

Mr Boyle's show will no doubt overflow with curry and calypso as the seventeen thousandth tribute to Bollywood since the Millennium merges into a sanitised version of the Notting Hill Carnival and then back to the gangsta rappers reprised so embarrassingly before the world in 2008. If any white person appears at all they will be bleach blond PVC clad sluts, gyrating like sexually aroused gibbons around the rappers, or beer bellied skinheads who briefly stumble across the arena before being chased away by dreadlocked Rastafarians either dressed as footballers, or maybe naked like on the twenty foot high billboard which was displayed outside London Bridge station for most of 2009.

There will be no sign of Christianity, but no doubt Islam will make an appearance, perhaps burka clad feminists will stride proudly across the stage or some kindly Mullahs will lead a group of suitably caramel coloured London Children through the audience and into a light at the end of the auditorium.

The sky will then light up with fireworks spelling out the EU's new oxymoronic slogan “United in Diversity” before Leona Lewis, Alexandra Burke and Danyl Johnson will appear beneath a multi-coloured spotlight and sing something about melting pots and rainbows, followed by the “Diversity” dance troop who unaccountably beat Susan Boyle in the Britain's Got Talent doing some Caribbean inspired dance whilst a specially flown in group from the ANC Youth League serenade them with vuvuzelas.

All that will before they get round to the 40 foot high effigies of Mandella, Obama, Shilpa Shetty and newly elected British Prime Minister Diane Abbot are wheeled out for the official worship section of the proceedings!!

Yes, I know I am only guessing, I have no way of knowing what that show will actually be, but do any of you, in all honesty imagine it will be that much different to what I have just described?
Posted by Sarah Maid of Albion at 07:48

Guaranteed to contain at least one thing worse than anything you can imagine.

These "games" are a colossal waste that our countries really cannot afford. They always cost more money than they bring in, and they always become an excuse to destroy some part of our heritage in order to create the location to host them. They should be left to those foolish enough to want to waste money on them. The "prestige" of hosting them is strictly a transient matter, of value only to a few, while the cost is borne by the entire nation. The nations of the Anglo-sphere would be wise to walk away from this waste in order to focus our resources on the real war we need to fight.

Care to provide any intelligent elaboration on why you feel that Boyle is an unworthy director? Your criticisms seem to be that 28 Days Later has a black woman in it, Trainspotting is about drug addiction, and Slumdog Millionaire is liked by liberals (I'm sure, incidentally, that it has plenty of conservative admirers as well - it didn't strike me as a politically divisive film). None of these are what I'd call solid objections to his work.

Anonymous 05:58, Can I respectfully suggest you get a life and a sense of humour.

Sadly Sarah I Doubt Anon can get a life or a sense of humour as it appears they are rather thick after reading your post they still do not see the point you are making.
Great article BTW. And er slumdog was a pile of poo.

A sense of humour? Ah, so this blog is actually a, elaborte parody, and the strange individual who thinks that interracial marriage is a threat to society is actually just a comedy persona that you put on? That would explain a lot.

No Dear, that's me, it is the ones who think it isn't a threat who are the (very bad) jokes.

Probably there will be a black one-legged lesbian race together with a high-heeled mincer's relay. Can't think what the baton will be. There will probably be a gladitorial opening session where all Christians are thrown to the lions followed by a 300 yard hurdles for those claiming disability benefits.

As for the choice of 'edgy' Danny Boyle for the production of the opening ceremony, I reckon we should be looking forward to the original meaning of the term 'opening medicine' which was given to a powerful purgative which produced an instant and violent bowel motion in the user.

The Beijing ceremony itself had to be spectacular, but it was based on the Chinese view of their nation, which is still weighed down with the worlds largest inferiority complex. But perhaps we should be grateful that they did not broadcast the truth, especially as seen by the outside world.

Well now that it's all over I'm happy to report hat you have the largest egg possible on your face. Racist.

Not at all, as I said here http://sarahmaidofalbion.blogspot.co.uk/2012/07/boyles-dream-of-england.html it was, if anything, worse than I predicted!