That last refuge in the shires 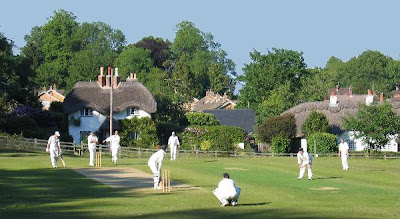 Some have asked why I called my last post "A letter to Tory England". I did so, because it is aimed at those living in the villages and Market Towns of so called “Middle England” and because they are primarily white and primarily they vote for the Conservative party. Yes, there are Labour voters in the countryside, as there are Tories in the cities, however, if one were to strip away the large urban areas of Britain (dream on) and leave only those parts of it I am addressing there would a huge and permanent Tory majority, at least there would be until everything begins to crumble.

The “Tory England” in my earlier post has not yet suffered as a result of immigration to anything like the same degree as the rest of the country. The only immigrants who have ventured into the countryside in any great numbers have been the Eastern Europeans, such as Poles and Lithuanians, who are largely inoffensive and are more likely to integrate into an area rather than causing the area to adapt to suit them, although that may be changing with the arrival of those whom the media like to call “Romanians”.

Also, as they are white, unless one speaks to them, which can be avoided reasonably easily, it is even possible to pretend they are not immigrants at all. In any event those who are likely to be in competition with them for low paid jobs probably don't vote Tory.

On the other hand. most third world immigrants do not tend to be country lovers and have so far gravitated to the large cities and urban areas where they already have established communities, and, of course, there are larger stocks of public housing. In reality the only time you will see a black person in the countryside is in a dairy product commercial on the TV, in order to provide the requisite diversity before rushing back to the city as soon as the camera stops rolling.

Asian business is starting to make an appearance in the shire towns, in the form of curry restaurants, Asian shops or small businesses, and, even in the shire towns overseas qualified doctors are cutting swathes through the elderly population. However, these towns and villages are still massively white, and what diversity there is, is of a level most of us could live with, if we didn't all know where it inevitably leads.

That will not last of course, for a start the fanatics who run our country will not allow that sort of segregation to continue and they will find ways of importing diversity to the shires, but that campaign hasn't started yet, and so far the shires still provide a temporary refuge from what is to come.

Until the inevitable end does come, that flaw in the English character which would rather not make a fuss takes control, and whilst they do not have to confront a problem it is easier to ignore it. I don't think they are “Blissfully unaware of the problem”, after all many will have moved away from the urban areas because of the problem, but whilst they can't see it, it is easier not to think about it. Also, if they rely on the mainstream media they will know very little about what is really going on.

Some may even believe that mass third world immigration is a good thing and greet it with pompom waving enthusiasm in the way that only an ideological fanatic or one who is not forced live with its results can do. Some welcome it because they profit handsomely from it but they are a small cynical minority, The other 90% would rather not take a stand on a subject like immigration for the single reason that like most of Britain they have been cowed into obedience by the “R” word. They were conned into believing that talk of “Immigration” made the Tories the “nasty party”, a devastatingly clever trick which still effects Tory party thinking today.

I have never voted Tory, but I know how Tories think. It is because of that word, and because they do not yet have to confront the consequences of the greatest betrayal our nation has ever seen, they can contemplate voting for a man who would sack any member of his team expressing support for that great and rare Tory, Enoch Powell's views on immigration. This despite the fact that, within a generation from now, when Tory England has finally suffered the results of their actions, as they surely will, a Tory voter who does not support Powell's views on immigration will be a rarity indeed.

Of course, then it will be too late, and there will be no satisfaction in saying they got what they deserved, because we will all have paid the price.
Posted by Sarah Maid of Albion at 03:14

I have noticed that there are a lot of properties up for sale in these idyllic small towns and villages. I don't know if that is due to the credit crunch, or whether some have foresight of what is to come and emigrated.

I used to live in a "New Town" in Essex and for the most part it was mainly white with a small population of Asians as part of the diversity. I then moved to the outskirts of Oxford which was actually rather nice since it was multi-culti free for the most part and pretty much idyllic. I now live in central London and the difference is unbelievable.

Everywhere you turn you are greeted with a brown face either afro ethnic or asiatic. A far cry from the England we should have.

Just recently I had the displeasure of returning to that Essex new town and boy have there been changes. It seems that since they have ruined inner London they have moved on to pastures new. Never before outside of London have I seen so many black people in one place. Of course the immediate area has suffered. Litter, ramshackle houses and gangs of feral coloured youths terrorising the long time white residents.

They're spreading. Coming to a town near you soon!

I thought your original post was very good and self-explanatory but I've linked to this second one as well by way of an update. You're quite right in what you say.

It's not just England - although that country is the most heavily affected - it's all of the western world. Japan has largely escaped multiculturalism and may yet save their ethnic identity and culture. The UK has the second highest rate on immigration in the world as far as I can tell as government stats are highly suspect.

The UK admits to 600,000 a year, but adding in asylum seekers and illegals it's probably closer to a million. And that's not counting migration from the EU. When we consider that white flight is causing hundreds of thousands of English men and women to flee every year then in a generation English people will be in the minority.

I note as well two cases of British men's Canadian wives being refused entry - white, English speaking, educated women from a largely British colonized nation. You couldn't make it up.

Canadian women are such strong feminists that their British husbands may well be better off without them, in the long run. As for Essex, we have Asian lady Priti Patel as MP for Witham & in Stratford on Avon (Warwickshire)another, male Asian MP. Middle class white English find it very hard to get professional jobs for their sons, as 70% of such jobs now go to women and the remaining 30% to ethnics. That's nursing, teaching, medicine etc.

In Central Essex now we have an Asian woman MP, Priti Patel at Witham, so it's not just "working class" New Towns like Basildon & Harlow t5hat have to be ethnically cleansed. In Warwickshire they have an Asian male MP at Stratford on Avon. In Yorkshire a Ugandan Archishop Sentamu.

It is increasingly difficult for middle class families to get professional jobs for their sons, since 70% are now reserved for women and the remainder for ethnics: that's nursing, teaching, medicine, academia. Hospitals, Colleges & Universities are scattered all over the Shires & they are increasingly dominated by ethnics; up to 70% in some cases. Look at Cambridge & Peterborough, for example, in Cambridgeshire, both with 20% ethnics and a far higher proportion in the Primary Schools.