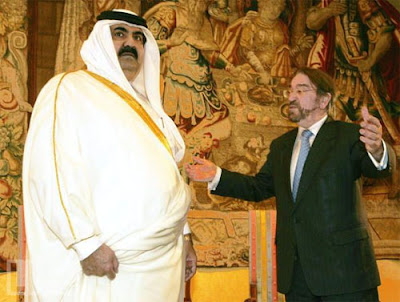 Chairman of the Belgian Parliament Herman De Croo greets the Emir of Qatar
The following shocking example of a European government (run by the New President of the EU) ignoring the wishes and welfare of their own people in favour of illegal colonisers, was published on the Brussels Journal site yesterday.

Governments vs The People:
Replacing The Population By Another One
There are conspiracy theories that hold that Europe’s political establishment is deliberately attempting to replace the continent’s population by an entirely different one. Though conspiracy theories are rarely true, Europe’s political establishment is making it extremely hard for the sceptics to refute them. Take, for instance, the recent Belgian amnesty for illegal aliens.

Last July, the government of Belgium announced a collective amnesty for illegal aliens. It is Belgium’s second general amnesty in barely a decade. When the previous one was approved by the Belgian Parliament in 1999, the government promised Parliament that it would be the final one and that henceforward people who entered the country illegally would be sent back. Nevertheless, there has been no crack-down on illegal immigration in the past ten years and hardly any illegal aliens have been sent back.

Last July, immediately after the parliamentary recess had begun, the government of Prime Minister Herman Van Rompuy decided there should be a new amnesty to “regularize” illegal aliens who can demonstrate that they have “integrated sufficiently” into the country, e.g. by having children at school. The government took the decision unilaterally, without approval from the Parliament. This is against the law; the Belgian government cannot unilaterally grant a collective amnesty. Only Parliament has the power to do so.

The parties of Van Rompuy’s government coalition shrugged their shoulders. They refused to react against the usurpation of parliamentary powers because they did not want to open a public debate about immigration. Polls indicate that the overwhelming majority of the Belgians opposes the new round of regularizations. The Vlaams Belang, Belgium’s main opposition party, however, went to court. It requested the Council of State, Belgium’s highest administrative court, to annul the amnesty – which it did on December 11.

The government’s reaction to the annulment is astonishing. It announced that the court ruling would make no difference and that the illegal aliens need not worry. Mr. Melchior Wathelet, the Secretary of State for Immigration, said that, instead of collectively regularizing the 50,000 illegal aliens with one single signature, he will sign 50,000 individual regulations, granting each of them an individual amnesty.

Continue reading at the Brussels Journal

Also, are we to assume that those illegal immigrants granted amnesty in Belgium will now have an automatic right of access to Britain?
Posted by Sarah Maid of Albion at 11:26

remember that almost all of us who survived the cull of the 20th century come from family lines not extant when our rulers treated with these older peoples, long before we sprang magically into existence within the hell hole cities they built to enslave us.

We do not count.

Both are our enemies.

It makes no sense, every European country has been raped by its poltical elites for decades and they continue to get voted in. Some people are obviously mentally ill, for example socialists, wiggers and skanks. There are others though good seemly patriotic and normally intelligent people who hate whats happening but can't seem to make the obvious connection between the people they have put in power and the people in power who are in the process of destroying them.

It is impressive how effective the cultural marxists methods of control are. In one or two generations they have managed to take the most impressive race of people and break them. It seems we are, as a race, now so demoralised and full of self-loathing that we can not even muster the will to think for ourselves its just so much easier to believe the lies fed to us by media propagandists. Its all very very sad. Weakness guarantees failure. If we can't find it in ourselves to do more than we are and take back our countries we deserve all that is coming to us.

I would say this is shocking, but it isn't. It's undemocratic, disgusting and contemptuous, but not shocking. There IS a conspiracy. There has to be. I cannot find another plausible explanation.

I don't know whether the linked video below has been displayed before, but can you guess the "African" city seen HERE?

The enhanced threat of invasion is real. Belgium is an ideal place for more of the alien hordes to be massing and they are already established here.

The degeneration of national identity into a mongrelised mess in this way would make it easier to establish a one-world kingdom. I think that's the diabolical grand plan.

The greatest nation in the West has already succumbed to this strategy by electing Obama. He was the 'test case,' I believe.

Watch this nation succumb in June when it exchanges Brown for Cameron in June, or Tweedledum for Tweedledee. (The fact that the bus may get a different driver part way through its journey doesn't affect the final destination at all. Though it is hoped we get some real MPs in the persons of Nick, Andrew and others.)

That's a great pic of you, Sarah, btw. May you and your family have a joyous Christmas and 2010 (my above remark about June 2010 notwithstanding).

I don't see how Brussels Journal can hint that it may be a conspiracy theory, surely they have heard of the Euromed agrement...