Beneath the Tattered Rainbow 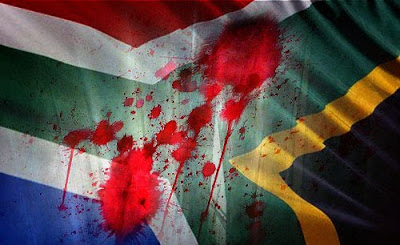 The following news stories all of which appeared within the last six weeks, merely scratch the surface of what is actually happening in South Africa and the dangers currently facing the beleaguered white population:

Johannesburg - A farmer was killed and a number of other people seriously injured in separate farm attacks in Baltimore near Lephalale in Limpopo, the Transvaal Agricultural Union's northern branch (TAU SA north) said on Wednesday.

This was indicative of the escalation of crimes targeted at farmers in the area, according to union chairperson Japie Spanio.

"Mr Izak and Mrs Mariaan Jansen van Vuuren of the farm Clanwilliam were attacked while going home after church on Sunday. Mr Jansen van Vuuren is badly injured and will have to undergo extensive plastic surgery to his face," said Spanio.

He said the attacks follows a similar one on October 24 in which Pieter Botha of Mokolo Safaris was also badly injured.

Botha was attacked just three days after another farmer, 65-year-old Jan Potgieter was killed at his farm.

Attacks may be linked

"It is indeed highly suspicious that [there were] three attacks in the same area in ten days,” Spanio said.

A month later, on Friday December 4, a further farmer was shot dead during a failed robbery on his farm outside Ceres in the Western Cape, the provincial agriculture department said on Sunday. "Mr PM Cilliers from the farm Loraine, outside Ceres, was fatally shot on Friday in what is presumed to have been a fumbled armed robbery," said spokesperson (don't they always. Ed)

Cilliers left his two children and two friends in the house and went outside when he heard a noise at the back door.

"Upon confronting the “robbers”, a scuffle ensued during which four shots were fired. His friends phoned their parents, who then contacted the police."
Cilliers died shortly after the police arrived. Nothing was taken from the house. No arrests had been made.

In a separate incident the previous day a man from a farm in the Roossenekal district in Mpumalanga has been "executed" with his own firearm in a revenge attack.

Gawie Hough, 42, was attacked two months after a former employee of his brother threatened him with the words: "I'll show you what I can do with a white man."

Death of a father

Johannesburg - Two children hid in silence under a blanket last Thursday morning, after robbers had shot their father in the stomach.

Danie Labuschagne, 37, of Brakpan on the East Rand, died a few hours later due to internal bleeding.

"He looked at me as if he wanted to say 'help me'," said Labuschagne's 12-year-old daughter, Monique, on Sunday.

Labuschagne would have turned 38 on Christmas day, according to his heartbroken wife, Madelein, 37, about her high school sweetheart, the man who'd been "her everything".

As we know, South Africa is the rape capital of the world, however, it seems the police are now getting in on the act :

First News Story: Pretoria - A 29-year-old woman says her life is ruined after she was allegedly raped by a policeman while being detained at Rustenburg police station.

'I'm not human anymore. There is just nothing left of me," said the woman, who prefers to remain anonymous.

"I don't have a life anymore. I've lost everything. My life is ruined."

The woman, who has an 18-month-old son, is the second reported case of an alleged rape by members of the police in the last two weeks.

When he heard about it, Martie Olivier’s husband, Sarel, went to the Kempton Park police station and assaulted various police officers on duty before being brought under control.

He said they were unable to lay a charge of rape later that day because the police refused to take their statements.

Although rape victims are not normally identified, the couple gave permission for their names to be published.

And guess who's been arrested!!! - An East Rand man whose wife was allegedly gang-raped by policemen, appeared in court on Monday charged with intentional damage to property, while his wife's attackers are still at large.

Last month, just after Sarel Olivier's 29-year-old wife, Martie, had told him about her ordeal, he allegedly broke a window and a glass partition in the Kempton Park police station.

While he was in that office, his wife was allegedly raped again.

Olivier was arrested at the police station on Friday, when he wanted to lay a charge of intimidation. The couple have apparently been followed and have received threatening phone calls since the alleged rape took place.

Pietermaritzburg - Two brothers, who narrowly escaped death in a dramatic shooting on Monday, drove through morning rush-hour traffic with blood dripping from gunshot wounds to get to a hospital in Pietermaritzburg.

Pieter, 57, and 59-year-old Rodney Bezuidenhout are recovering from neck and stomach gunshot wounds respectively after they were shot by gunmen at their workplace in the Mkondeni industrial area.

"The bullet went through my neck, from one side to the other. The doctor said if it was one centimetre further I would be dead," said Pieter.

"They were shooting to kill, they were there to kill us."

There is some good news though:

Johannesburg - Cannabis farming now forms an official part of the agricultural sector, even if illegal. It will be included in future calculations of the gross domestic product (GDP).

And prostitution falls within the personal services sector. This is a logical consequence of Statistics South Africa's decision to include illegal and underground economies in the country's GDP for the first time.

And, believe it or not, their inclusion is global practice. After all, they do contribute to a country's economy.

The outcome will be that South Africa's economy will be considerably larger than currently reflected in statistics.

Top economists have long considered that South Africa's GDP could be as much as R100bn bigger than that currently reflected - among other things because parts of the hidden economy, which includes illegal and underground operations, have so far been excluded from the GDP.

The base year against which economic growth is measured will also move from 2000 to 2005.

All these adjustments will apply to the GDP and economic growth figures for the first quarter of 2002 to the third quarter of 2009.

The adjustments will change the relative size of the sectors in the economy, and their contributions to growth. One consequence could even be that sectors that contracted in the past will now grow.

So it seems crime does pay, at least in a state run by a bunch of thugs, criminals and murderers

Some sites including the Cape independence Movement and My South Africa Sucks are reporting that a number of Western Camera crews, including one from the BBC have already been robbed in Cape Town. Of course not a whisper about this in the main stream media. But then such people would rather be gang raped than admit to the colour of their rapists, even though the safety of thousands of young football fans may be at stake.

NB: I have updated the figures recording the murders of white farmers to include the killings of Jan Potgieter and Gawie Hough
Posted by Sarah Maid of Albion at 09:46

"But grim prognoses aside. We must also take time to celebrate our educational successes. As much as we bemoan the challenges of transforming the education system, we must also draw out our successes. The single-minded dedication of learners who commit to their studies against daunting odds, for example Krystal Theron from Springs who wrote her matric exam from her hospital after being brutally stabbed. Even a violent rape attack and subsequent HIV infection could not stop Jamie Paterson in Gauteng from sitting-and passing-her matric exam.1

A Day In The Life Of White South Africa


hopefully this is just what im looking for, looks like i have a lot to read.