Yet again a "British" connection 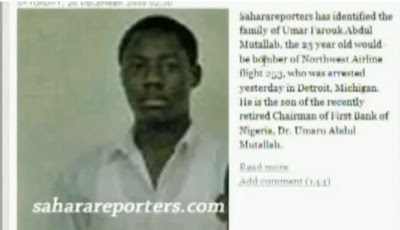 Given how the terror attack at Fort Hood has been covered up and dressed as something entirely different than what it actually was, how long do you expect it will be before the news media are trying to persuade us that wearing explosive underwear is merely a fashion statement?

Was anyone surprised to discover that the 23 year old Nigerian who allegedly attempted to bring down a crowded aircraft landing at Detroit airport on Christmas day, by detonating his explosive packed Y-Fronts, had very recently been a British resident? A British resident, no less who lived at an address so exclusive that most British natives wouldn't have a hope of living there outside their dreams.

Of course he had lived in Britain, virtually every crazed terrorist, every genocidal maniac and every radicalised nutter on Planet Earth has lived in Britain at some point, or, in some cases, continue to do so. What our leaders refuse to admit is that if you open your doors to everyone some very unpleasant people will walk in.

At the present time the evil men whom we have permitted to make Britain their commant post mostly use our country as a base where they can plot acts of terrorism, or as a staging post when carrying out attacks elsewhere in the world. However, that will not last, and the day will come when we will reap the whirlwind for what we have allowed to happen.

"British" will soon mean the same thing as "American" does now, id est, nil. The English, Welsh, Irish and many Scots, as well as most of Europe, are where we were in the the U.S. a few decades ago. We need new terms to describe ourselves.

That is a brilliant line about the media presenting wearing explosive underwear as a fashion statement, Sarah.
You know the rest of us will be nicking it for our own articles! You need to work out how much you will want in royalties, now.

Please feel free to nick it!