Oliver Skeete - Pride of the UAF 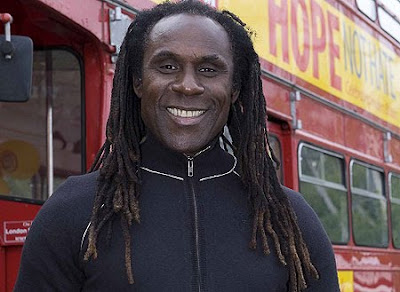 Champion horseman Oliver Skeete yesterday warned the BNP is trying to turn back the clock on racism as our Hope not Hate bus reached the Midlands.

Oliver, 53, who met our bus in Leicester to back its message of tolerance, said: "I love this campaign.

"My dad was confronted by signs saying no dogs, no blacks, no Irish. Now you've got the BNP trying to turn back the clock. We should never go back to those days."

Having won "black Briton" Skeete's endorsement the Hype not hope bus trundles on to spread more lies and disinformation.

Showjumper Oliver Skeete has been charged with stealing �2,100 cash from his stables.

The dreadlocked dad of six - who once dated glamour girl Jordan - was arrested and bailed by police to appear before Bromley Magistrates' Court on Christmas Eve.

He is charged with two counts of theft from Ringlands Stables in Biggin Hill, Kent

I had a look at the 'Bromley News Shopper'to see if his case had been concluded, but strangely enough no reference to him, nothing in 'The Sun' either.
How strange is that?

This guy looks like one of those alien creatures from the movie Predator.