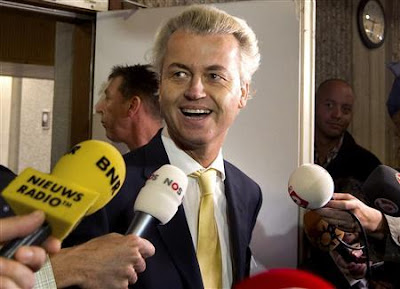 Minorities groups said today they would now take the case against Geert Wilders to the United Nations Human Rights Committee, arguing this morning's court ruling meant the Netherlands had failed to protect ethnic minorities from discrimination.
Their fury followed Mr Wilders' acquittal on all charges of inciting hatred against Muslims after he described Islam as fascist and compared the Quran to Hitler's Mein Kampf.  Amsterdam judge Marcel van Oosten accepted the Freedom Party leader's statements were directed at Islam and not at Muslim believers. They were, therefore the judge ruled, "acceptable within the context of public debate".
After a trial which has lasted many months, Wilders left court to cheers and applause from his supporters, but their delight was not shared by Muslim groups "The acquittal means that the right of minorities to remain free of hate speech has been breached. We are going to claim our rights at the U.N.," said Mohamed Rabbae of the National Council for Moroccans  Meanwhile Ties Prakken, the lawyer for the minority groups who had campaigned for this prosecution expressed "deep disappointment".
Outside the courtroom, the 47-year-old politician said he was "incredibly happy" with the verdict."It's not only an acquittal for me, but a victory for freedom of expression in the Netherlands," he said.
The outcome is expected to significantly strengthen Geert Wilders position in the Netherlands despite the expected posturing by Multicultural zealots and and anti-Western groups at the United Nations.
Posted by Sarah Maid of Albion at 10:51

Even more bitterly angry and frustrated will be the loony left: Their intolerence and hysteria has been neatly and decisively exposed...eat it all up now y'hear...yum yum, come get some more...

No one can blame Wilders for walking the tightrope...

But, can you imagine if our ancestors, when the German army occupied the Channel Islands, had said...

"Obviously we hate Nazism, but we have nothing against individual Nazis."

"Well, now they are on British soil, they're British aren't they? Just issue them passports and they'll integrate, right?"

I hope he has the funds to secure the services of a squad of ill tempered bodyguards. He'll need them.

Yes, most definitely a victory for freedom of expression.
Hopefully the journey to domination by Islam is being slowed, if not yet stopped.
What the UK needs are men like Wilders to bring their voice to British politics. But are there any out there like him?

Shaun, I'm not impressed with Wilder's ideology, but he is a real hero of our time. He could one day be regaled as a saviour of Europe.

Sounds like more of a victory for assimilation. In white countries only. Wonder how anyone less connected would fare?

"The acquittal means that the right of minorities to remain free of hate speech has been breached. We are going to claim our rights at the U.N.," said Mohamed Rabbae

"What the UK needs are men like Wilders to bring their voice to British politics. But are there any out there like him?"

Nick Griffin of the BNP is there but no one wants to listen to him.

The liberals use every dirty trick in the book to discredit him.

Poor Gert Wilders, why does he do it? That sleek physique, that winning smile. Where have I seen it before? Oh, hello, only a moment ago while watching women's tennis. Not the competitors, mind, not that there is ANYTHING to tell them apart, these days, but the spectators. What a bunch of fat battery chicks, sporting their fatuous locks and tattoos, chewing mightily on their squid, ripe to be overrun by a more vigorous, less forgiving race in thrall to a young religion. This exact tableau greeted the triumphant Persians who had just crossed Asia Minor as they descended to Antioch, whose fat, stupefied inhabitants watching the games in the stadium, overfed with artificially cheap grain and spirits, looked up wonderingly as the Persians thrust microphones at them. Oh, hang on.

I'm with you on Wilder's ideology - being anti Muslim is one thing but his ideological basis seems to come from a strong leaning towards Israel and the Torah teachings.

He wants the Muslims out of the Netherlands but seems to forget who the people are that to this very day work tirelessly in the background of all nations to encourage Islamic immigration in order to divide and conquer the host.

Frans - I don't know if he will need ill tempered body guards - Mossad will probably loan him a few good men!!.

I'll give you this - he has got balls - as have all the right wing leaders of Europe that seem to be making themselves heard these days.

I just hope that he is not being manipulated.