"We do not know why such a terrible thing happened, but what we do know is that this is not racially motivated as Danny was a popular boy with friends from all cultural backgrounds".

WOW!! does that mean that if Stephen Lawrence had some white friends his killing wasn't racist either??!!!! Why didn't the BBC tell us? 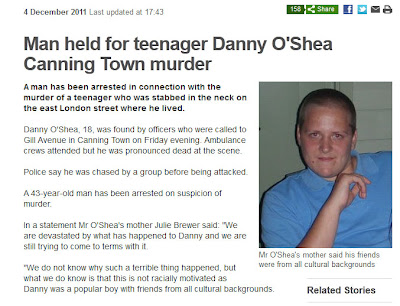 CORRECTION
I apologise, I misread the article, and note that the statement above was made by Danny O'Shea's mother, not by the police. However a police spokes person did state "I wish to reinforce the family's position that there is nothing to suggest Danny's murder is racially motivated." One has to ask whether the police would have been so quick to rule out a racial motive had a black boy been hunted down and had his throat slit by a gang of whites.
Posted by Sarah Maid of Albion at 12:16

A white boy is chased down and butchered by a gang of immigrants and from the outset the police are refusing to even contemplate that this may be a racist incident!! Incomprehensible, infuriating and depressing. I am disgusted and despairing. Equality under the law? Don't make me laugh.

In effect what the police are saying is that because the white victim had friends of differing races he wasnt racist and because he hadnt been killed for being a racist then the black scum who cut his throat must have had some other motive for killing him.

It shows the one-sided nature of the police. They batter the EDL with truncheons and set the dogs on them, while bringing the lads who the state is trying to fit up for the murder of St.Stephen are taken to trial 3 times, yet no ethnic commits racist attacks.
I used to respect the police but now I regard them with contempt as a biased, political police service who do not uphold the law equally. The ideological anti-racist movement is a euphemism for anti-White: Whites are persecuted by their own rulers in their own countries to give ethnics power and rule over them.

Conversely then, if Danny did not have black friends then would the police call it a racist attack?

If a woman who is raped has male friends then it is no longer rape?

If a child is raped but has adult "friends", say, a teacher, then is it not a paedophile attack?

If you are robbed by a human but have other human friends then is it not theft?

Does anyone else other than patriots see the insanity of the fascist Left?

This is not a quote by the police. It is a statement made by Danny O'Shea's mother, June Brewer, which it appears to me has been doctored and edited by the police to suit an agenda.

They have been brought up with the Cultist view of racism as explained by the obnoxiuous Jo Brand.

Blacks can't be racist because they have no power.

So, the police know for definite that these 'youths' all knew Danny personally, and by extention they therefore know these 'youths' knew he had culturally diverse friends so whatever happened wasn't racially motivated?

(not the Andy above)
According to Macpherson a crime is racial if anybody thinks it is and I (and no doubt millions of others)definately think this is a race hate crime.
Although plod and the BBC will move Heaven and Earth to convince us otherwise.

It was the same back in 2005, with the murders of Anthony Walker and Richard Whelan.

It would appear that some kinds of murder are so commonplace (in London) that they do not receive much in the way of news coverage.

No prizes for guessing which kinds.

Law enforcement in this country should take careful note of the following. The same principle applies in all applications of the law and bent law enforcers, like "scribes and Pharisees, hypocrites!...shall receive the greater damnation" Matthew 23:14.

"Ye shall do no unrighteousness in judgment, in meteyard, in weight, or in measure" Leviticus 19:35.

The quote is not from the police at all, and I hope you change your posting to reflect this.

It is from his mother.

In a statement Mr O'Shea's mother Julie Brewer said: "We are devastated by what has happened to Danny and we are still trying to come to terms with it.

"We do not know why such a terrible thing happened, but what we do know is that this is not racially motivated as Danny was a popular boy with friends from all cultural backgrounds.

I had to check, as such a statement from the police would have been shockingly foolish.

But if the victim is "racist" he or she is fair game anyway.

There is only one way out of this. But time is running out.

"Does anyone else other than patriots see the insanity of the fascist Left"?

"We do not know why such a terrible thing happened, but what we do know is that this is not racially motivated, as Danny was a popular boy with friends from all cultural backgrounds".

If that is a direct quote from the murdered boy's mother without any prompting from the authorities, then I suggest she has been thoroughly brainwashed by the leftist media into not thinking, speaking, or hearing ANY aspersions directed towards Blacks.

Her son has just had his throat slit by a gang of marauding "black" males, and her first reaction is to quickly quell any suspicion that his brutal murder might have anything to do with a race-related motive. Incredible!!

The Stephen Lawrence saga has been re-hashed over and over again for almost 20 years, yet we can't get to first base (baseball term) on this vicious killing of a White boy because the victim's own mother assumed the "political correct" position.

This mother requires a mentor of the "Emma West" calibre to set her straight... and fast!

A very sad state of affairs GB is having to tend with. Things are not supposed to be this outlandish in England...very upsetting. We in America are a bit behind you, but things are following a similar path here. A clueless Archbishop? Hmmm. How long until the white majority becomes the white minority? Our political systems are quite vulnerable to being hi-jacked and re-worked for other than historical aims.

I wonder who's paying for that heathen's dialysis?

In the meantime, "the worst of the heathen" Ezekiel 7:24 continue to flood in, sadly.

I decided that deserved its own posting

I myself had the pleasure of knowing Danny & I do not think it's fair use commenting & talking about it on here! Danny was a lovely boy & so are his family & just remember sometime in the future julies going to want to go on these sites to see the kind words people wrote & then she would see this! Disgusting the family's going through enough pain & so font bring them more. Sorry don't mean to be rude but it's not nice reading thanks

Thanks for your comments Anonymous 23:21, I have no wish to distress the family and I do understand what they are going through.

However, we can no longer brush these crimes under the carpet and allow the media to continue to pretend these crimes are not happening, or that the the only racial violence is white on black.

We have to expose the truth because too many families are going through what Danny's family are going through. These horrors are occurring because of what malevolent politicians have done to this country.

We can not ignore that, and I am sure the O'Shea family would not want other children to die so that they do not have to face the truth about their son's death.

Tony Shell's report should be highlighted.

"The white community experiences approximately 30 times more victims of interracial murder than should be expected, when compared to that experienced by the BME* communities."

That is a major and on-going concern for the nation as a whole that should not be ignored.

For evil to triumph, good men need do nothing. There are few good men and they ain't doing squat. You reap what you sow, and people tend to get the kind of government they deserve.