London twinned with the DRC 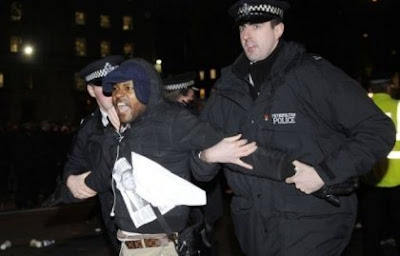 You may not have heard about this, but over the weekend 143 people were arrested on account of a violent riot which took place in Central London. The rioters were protesting in Central London on account of an election result in the (so called) Democratic Republic of Congo, in ....uh ..... Central Africa.
You may not have heard about this as much of the mainstream media appear to have taken a vow of silence over the story, as they always do when events like this cast an unattractive light on their beloved multicultural society.
One can only imagine how differently events would have been reported had a mere 43 white people been arrested for rioting in the nations capital. Their trials would have been daily news fodder for weeks!
Also, as with similar events in the past one has to question why people feel London is an appropriate place to protest against events in third world  hell holes which were never even a British colony.   It seems that another blessing bestowed by mass immigration is that we must now suffer the unpleasant consequences of events many thousands of miles from our shores.

Yes, it's intensely strange that they should choose to riot about election results back in the Congo in London, attacking innocent bystanders including carol singers trying to raise money for the Macmillan Cancer Support. What had they to do with this? Nothing whatsoever. Nonetheless, this has lent inspiration to the reworking of an old favourite: 'God Rest Ye Merry Gentlemen' http://durotrigan.blogspot.com/2011/12/congolese-carol-arrangement-as-per-god.html

If our politicains decided on a policy to detonate the entire UK nuclear arsenal on Guy Fawkes night it would cause less damage.

And this isn't worse than what happened on the tram?

And which was so helpfully recorded that the police were able to use it.

( Even though they are not allowed to convict off youtube in the case of a muslim man.)

Double standards all around.

We had some major demonstrations here in South Africa as well. With our Stupid government declaring the election "Free and Fair" within days of the polls closing, we know where their stupid alliances are. They have also come out in full support of numbnut mugagbe and have promised to support him and his bunch of insane zano pf gangsters in next years elections.
This continent is going to burn sooner rather than later!!!!

Hi Sarah,
Nice to see you are up and running as normal.
Welcome to Africa in London. I feel so sorry for you all. Sounds like Peter Hain is still at it. He instigated our problems here and conveniently left us in our predicament. I would find out where he's moving to next and when. Good Luck & keep up the good fight

This is perfectly rational behaviour for Negroes from this part of Africa - they have a mean IQ of 65 and high testosterone levels which result in almost all public expressions being of a violent and sexually aggressive nature.

This is due to their race, which is, obviously, a racist thing to say. Yet true.

Shaun, people will say it's racist, but then that's because wishful thinking doesn't make it true. "[A]lmost all public expressions being of a violent and sexually aggressive nature"? That's a pretty massive claim, and one, I notice, offered without any evidence. Are there neighbourhoods where the majority of public expressions are rape and assault?