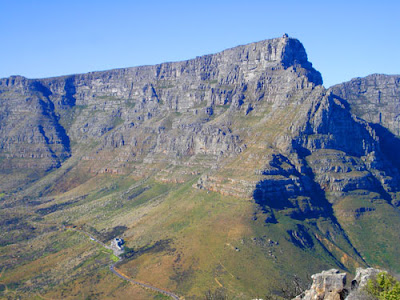 You have indeed sketched a pretty dark picture of South Africa Mr Wilson, but it was a picture we saw coming, at a time when the entire western establishment treated us as the skunks of this world. Your article makes no mention of this important fact, yet this was the rationale for separate development (apartheid) from the very beginning. It was not an overly racialist system as many believe; that was a view created by the demonic liberal media, who are now dead silent on the issue of a South African genocide at the hands of Black racists - a genocide which, together with Zimbabwe, has recently been moved to Stage 6 on the Countries at Risk chart. (see website: http://www.genocidewatch.org)

Please read Eric Myeni's open letter to the ANC and take a deeeeep breath of the fetid black racism that is brewing right now in ZA:
Anonymous Bosh

The English have to see South Africa in context , from the Boer war to 1994, the idea was to flood Boer lands with immigrants , the pass laws were controlling the foreign population , that was attacked first just like the uitlander question in 1900. Our enemies used the media and immigration to conquer South Africa. Please England wake up to this threat , we need you more than you know. The points dr. Ellis discussed is exactly what happened here ,blacks were bussed into all white majority areas to control them in elections. This will happen in England and all over Europe. The marxist are using the same techniques everywhere.

The 'English' as such no longer exist. They are already a minority in their own capital and probably in Birmingham and Bradford too.

Note - : There are English people and there are so called "English" Then there are the "British" whihc can be viewed in a similar manner - the latter 2 of which have been infiltrated by Marxist slugs and egregious filth over the last 8 decades or so culminating to the extent of what the UK is today.

It's disproportionate population with regard to land mass is keeping it 'afloat' for now while they top it up with ethnics but the whole lot will sink as soon as the populace becomes unidentifiable in terms of cultural id. pretty much like the Anglo/Spanish speaking inhabitants of the South or central America.

They destroyed it along with 'old' Germany - that is what the war was secretly all about - destroying the "German" - the 2 are related as you might know.

When they imposed the 1951 UN "human rights" asylum convention on the brow beaten remains of the UK NOBODY opposed it - no referendum NOTHING!

The patriotic indigenous populace no longer have an effective voice or content of people to withstand the "establishment".

@ anon 6:45 the English house of parliament was already hijacked in 1900 , the Boer war was a testament to that fact , I fully agree with all you said but I am hopefull that the real English will make a stand , they just have to. The Boers are also germanic , we are all in the same position we need too realise that and cooperate in whatever way we can. Failure is not an option .

The Boere have made the first move
They are petitioning the World Court in the Hague to recognise their sovereignty and allocate them territory in South Africa where they can govern themselves and live in peace alongside their black neighbours.

The British could make the next move if they could find some one in either The House of Lords, The House of Commons or the media with the semblance of an iota of guts to speak out against what is happening in South Africa and condemn the ANC Govt in the strongest terms for failing in its mandate to protect ALL its citizens.

In this case I refer specifically to the genocide being perpetrated against the whites within which are the Boer/Afrikaner farmers.

Whilst filth like Kasrills and co exist the Boers - in fact anyone whose "conservatively white" will be threatened.

This gargoylian reptile and his comrades within the 'hidden hand' are pure poison and the driving force behind the murder of whites.

Malema is just a two legged Rottweiler and like Mugabe trained for purpose and effect.

What is really sad about this is that most South Africans are of European descent, WE ARE YOUR FLESH AND BLOOD from countries such as Germany, France, Holland and of course the U.K. We have/had created a mini Europe on the continent of Africa. We had thought for you in WW1, WW2 and Korea but because South Africa was mineral rich something had to be done by sinister forces to obtain it hence the Boer Wars with the English invading us.
We became republic years later and England did not like that, something have to be done.
Yes we had apartheid and yes I was in the South African Defence Force for years but never did I see any mistreating of blacks, murderous and terrorist were dealt with as they killed indiscriminaly, black and white. We looked after blacks better than what the U.S. did to their black Americans but yet the world condemned us as the mass media portrayed us as evil and we were compared to Nazi's and the rest of the world swallowed it hook line and sinker but yet there were no death camps or extermination camps only schools, hospitals and universities for them, that is how bad we looked after them and provided for them.
Now our parents and grandparents are being killed, raped and tortured but yet the world stays silent on this fact. Let one white man do something against a black and the world press cannot get the story out fast enough. I mean after all we are evil, racist and Nazi’s! I suppose that is why your prince comes to visit us/our country on such a regular basis after all he did wear a Nazi uniform at a party – lol!
It makes you wonder what the world has become, our morals are totally screwed up or as I see it being used by those who will benefit from such sensationalism.
I would like to know where are all those apartheid activist now who marched the streets in London against apartheid. Please one of you come forward and tell us how proud you are of your achievement, what you have created here in South Africa, not just for whites but blacks as well.

@Zarky 09:32, Thank you Zarky, you have described the plight of the White South Africans, specially the elderly, who are easy target, very well.

It will be interesting to see the fate of Malema, who has wandered considerably off script.

The Chinese are already in full-on colonization mode in Africa. They're even taking over the lower-level jobs like street-markets and subsistence farms. They will make European rule look like a teddy-bears' picnic.