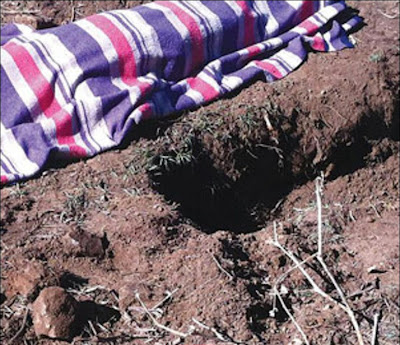 White South African Farmer Thinus Uitenweerde died horribly, after being stabbed in the stomach he was tied up and then, whilst still alive and conscious Mr. Uitenweerde was placed in a shallow grave where he was stoned to death.

The assailants, both young black men, then proceeded to rape Mr, Uitenweerde's 85 year old mother Bella whilst brutalising and kicking his physically disabled wife Magriet.  The two frail women were were then tied up and were left for twenty hours before they were discovered.

The deeply traumatised Mrs Bella Uitenweerde said she decided to go public with her story: "It was horribly difficult but I cannot take it back. It was horrible.'

Her daughter Mrs Anneline Steyn said: "my brother was stabbed in the stomach, tied up, and dragged to the grave his murderers had prepared. He was dumped alive inside his grave and stoned to death with the large sandstone boulders with which our (historic) family homesteads were built.He was lying on his stomach with his head in the sand. His skull was crushed. After my brother was murdered, the attackers turned on my mother and sister-in-law. "My 85-year old mother was attacked inside the house, tied up and raped by both murderers of her son.' They used the bandages she ties around her ankles and wrists against arthritis to cover up her mouth and face. People must be told everything. We want this (these attacks against the Boers) to stop'.
Report at Censor Bugbear Reports

Thanks to BR for drawing this to my attention
Posted by Sarah Maid of Albion at 12:38

Has anyone contacted the BBC about this or ITN, CNN et al?

Yet again, the savage blacks reveal what they are really like.

Cases like these make one wonder, even though it is unscientific to
suggest it, whether some races are not closer to the chimpanzee than others.

This note is just to let you know that an absence of comments doesn't necessarily mean that no one is reading…
Thanks for placing the article
Buck (B.R.)

It won't stop. Not until physical separation from Negroes (and Muslims in our case) is imposed by force. The Fascist Left want to see you destroyed, they must be opposed and defeated too. Or Western civilisation will die with the death of the race who created it.

I am so disgusted right now. This is never going to stop. Whites have to find a way out of SA. This violence will get worse after Mandela dies.

Anon@18:02, "Has anyone contacted the BBC about this or ITN, CNN et al?" The liberal press does not believe these stories. The local press does also desist from reporting on these brutal murders. South Africa is sadly going to be the next Zimbabwe and it will be far more violent than Zim. The communist that run this country have only their own selfish greed in mind. there is so much corruption going on here right now it boggles the mind. julius malema, the leader of the anc youth league, drives around surrounded by AK47 carrying bodyguards. Pedestrians are regularly run over and killed by these "vip" convoys that don't even stop when this happens. I wish we could leave this damned country but we are too old and simply don't have the money. We wouldn't even know where to go!!!

Is there not an international group to help white people like "pensioner" in South Africa?

I feel hypocritical saying this but us 'right wingers' 'conservatives' 'racists' call us what you like, are very quick to (rightly) slag off do-gooders of the left who put their hands out to help the so called down trodden niggers and untouchables....... but there's no group or individual from the 'right' that I personally know of who does anything whatsoever for our white brothers and sisters in Southern Africa or anywhere else for that matter?

We just prattle form comfortable surrounds in safe houses away from SA.

If there is a group out there, a GENUINE group that is, that does assist needy or vulnerable white South Africans please post their contact details on here so I can at least send a donation.

Pensioner - my heart goes out to you. Vasbyt as they say, help will come one way or another. Not all of us can live with ourselves sitting around and doing nothing.

I heard there is a small group in Sweden somewhere trying to raise funds but don't know the name? We need same here in UK, Holland, France and Germany.

Hang in there and keep posting in the meantime

if you want to assist the Boers please visit www.praag.co.uk they appear to be the only group that actually does anything. But if you want to really help the Boers fix your own countries asap , get the cultural marxists out of there. The Boers cannot even help themselves or the media tells the world what racists they are for looking out for their own people .

There are a number of small groups, each battling for funds, which act as the lifelines to many. Pensioners trapped in Zimbabwe are the most pitiful - some living on the streets, whose only food is a monthly parcel. On many occasions husband has shot wife, then himself, as the only escape route.
For more information: DISTRESSED PENSIONERS’ APPEAL FUND
w.d.walker@compuserve-uk.com

It is quite correct to say that the media is the major problem we face, since they deliberately ignore these atrocities. What their motivation is can be disputed but I think it is because the people who work there are communists and/or indoctrinated self-hating whites, and their masters are only interested in making money.

On option is to leaflet the pictures of these gruesome attacks in the West in such a way they cannot be ignored.

Readers of this blog can make a difference by doing the following:

(3) Ask each person you tell about this blog to write/e-mail/meet with their MPs and send a copy of this article to them, pointing out that this is just 1 example of the estimated 40,000 whites that have been randomly slain since "freedom" in 1994
(4) Ask each person to pose the question:
When is the British Parliament/Government going to speak out and call the ANC to account for what is going on in SA?

Point out that the British Parliament was in the frontline in the global condemnation of Apartheid.
Why are they so silent now.

(5) cc your letter/e-mail to Foreign Secretary William Haig. When he receives a few million e-mails on the same topic he will be compelled to do something.

I thank you for your support in this campaign

To Whom It May Concern:

The Zimbabwe Pensioners Supporter Fund is a registered Section 21 Non Profit Organization that supplies food to more than 1650 pensioners in Zimbabwe. Every 6 weeks more than 20 tons of food is transported in 2 trucks and distributed to 28 homes / organizations. Clothes and basic medicine is also supplied to the pensioners. The supply trip lasts 8 – 10 days and a distance of 8500 kilometres will be travelled by the 3 trucks using more than 2600 litres
of fuel. The value of the food and the cost of delivering it to the pensioners in Zimbabwe exceeds R200,000 per trip. The ZPSF relies entirely on donations to carry out this mission.

The food hampers serve 2 purposes.
1 They supply much needed food to the pensioner.
2 The pensioner then knows that someone cares about them

Please fax or e-mail the ZPSF your contact details so that your donation can be acknowledged and a receipt issued.