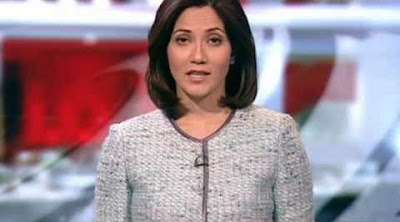 
Mishal Husain the Female Asian BBC autocue reader was involved in an incident in a supermarket where she claims her children were ‘racially abused’ to the extent that she felt the need to call the manager of the supermarket to make a complaint, demanding that the perpetrator of this heinous offence be ‘confronted’. What did this ‘offence’ consist of? Well, it seems that an elderly native Briton took exception to the behaviour of Husain’s children and told her that they should ‘behave like proper English children’.
In a sensible world most people would regard an elderly person telling off a parent for the behaviour of his /her children in this manner as what happens in life. The behaviour of the children might well have richly merited it in which case all credit to the elderly citizen. But this is of course not a sensible world.
It’s ‘racist’ if an ethnic say it is
In the Soviet-Style era of oppression in which we now live, the law is undoubtedly on Husain’s side. When she went running to authority in the expectation that it would spring to her side against the native Briton in this piffling incident, she was correct. According to the 1986 Association of Chief Police Officers definition, a ‘racist incident’ under the various Race Relations Acts is:-

Recommendation 12 of the 1999 Macpherson Report the said that the definition of a racist incident should be 'any incident that is perceived to be racist by the victim or any other person'.
(Ethnics of course cannot be guilty of ‘racism’ because according to its Marxist definition, as members of minorities they do not have social power, an essential ingredient apparently).
Super –Sensitivity Encouraged by the Law
That Hussein thinks this citizens’ remarks amounted to ‘racial abuse’ reveals nothing so much as  super sensitivity on her part on the one hand and a total lack of sensitivity towards the feelings of the native British on the other.
She seems on one level to be oblivious to or chooses to ignore the resentment that the people of the country rightly feel about the way they are being dispossessed of it by their political class through the importation of millions of aliens like herself.
On another she is probably very much aware of it. For all the ‘authority’ which she is said to convey on screen, her sensitivity almost certainly derives from a deep sense of insecurity. Insecurity in herself as a parent and the way she is bringing up her children and insecurity originating in the fact that those children, like herself will never be regarded by the bulk of the population as English.
Hussein’s BBC Career. Racial and Sexual Discrimination is OK when it’s in your Favour.
But let’s look at her career in the BBC. Whatever her capabilities – and it doesn’t take much to read off an autocue or indeed to ask people questions (It’s answering which is difficult) she was quite clearly chosen for her present position for three main reasons:-
1) She is Asian. The BBC quite clearly has a policy of slotting ethnics into high profile, up-front positions of this kind in order to propagandise a sense of establishment, authority and of ‘belonging’ for ethnics. Ethnics are also given jobs in programmes dealing with British cultural and historical matters for the same reasons, thus discriminating against whites.
2) She is Female. Having an Asian and Female as a news presenter is killing two birds with one stone since both ethnics and females score high points on the hierarchy of Political Correctness as ‘oppressed’ groups. White males are discriminated against wherever possible.
3) She is a good-looking in a European sort of way and for an Asian quite light-skinned. In the minefield which is the lexicon of Politically Correct sins (there are so many, aren’t there?) this of course is ‘lookist’ and also quite possibly ‘sexist’ as well as ‘racist’. However BBC apparatchiks seem to have concluded that there are limits beyond which the viewers will not go.
So we see that in the incident in the supermarket and when it comes to her career, Hussein is apparently more than willing to accept racial and sexual discrimination – when it is in her favour. There is only one word to describe this attitude: Hypocrisy.
Posted by Sarah Maid of Albion at 11:38

Can you seriously blame her???
She's only taking advantage of the 'opportunities' accorded to her by the anti-racist (byword for anti white) apparachiks of institutions like the "Runneymede Trust"

Some of these creatures although appearing to be white and in some cases "Saxon looking" are not indigenous to this country either, but the majority of 'question time' watching/participating prols would have you believe otherwise.., such is their fear through years and years of brain washing.

Hitler and Stalin I believe... not sure which was first.

See the link below..

You see.. this (the judge and defenders) are the form of 'alien' that facilitate other forms of parasitic alien into the country.

The 'legal' system or 'industry' as a whole makes a very nice living out of it at thanks to the expense of the gullibility and PC enslavement of plebiscite tax payers. Do you get it now? LOL!

A year or so ago, she was in the habit of pronouncing Aghanistan as "Afggghharrnistan" on the news.

Speaks volumes about where her true loyalties are eh?

The three reasons why Mishal Husain was chosen for her BBC role, sound exceedingly similar to why Canada chose a Black immigrant woman born in Haiti (Michaëlle Jean) to be our Governor-General a few years ago.

Thankfully, we now have G-G who is more representative of Canada's majority population....a White Canadian male by the name of David Johnston. Imagine that!!

Really though, this race pandering becomes more nauseous by the year.

Orwell's "1984" is gaining momentum in real life, and one of the most effective control mechanisims used against the White majority, is the false charge of "racism" hurled by emboldened minorities who are placed in positions of authority BECAUSE of their race.

I think what got her upset was the fact that she realizes her children ARE NOT ENGLISH-they may have been born there,have English accents but they are not nor will they ever be English.

"I think what got her upset was the fact that she realizes her children ARE NOT ENGLISH-they may have been born there,have English accents but they are not nor will they ever be English."

EXACTLY! A white person born in Pakistan would never be regarded as a Pakistani.

The notion that one's place of birth is the be all and end all of one's nationality is utter codswallop.