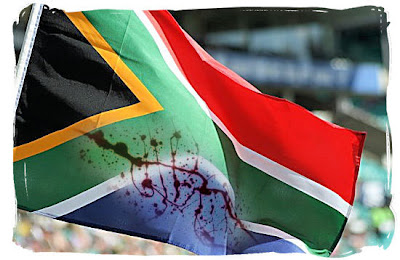 A British couple were found bludgeoned to death in the back of their car after being attacked while their seaside home in South Africa was ransacked.

The bodies of Christopher and Jennifer Early were discovered by local police in their Volvo following the robbery.

The couple, aged 69 and 62, were murdered last Thursday at the property in the coastal resort of Hibberdene, detectives believe.

Identity documents showed they came originally from Britain but were understood to have moved to South Africa in the 1980s.

A police spokesman for the KwaZulu-Natal Province said the couple were attacked with a "blunt object".

It gets more like the latter days of Rhodesia every day. I wonder how the people of Northampton feel about having Brian Mujabi in their midst, then I remember they don't give a fig about those his father stole from, murdered and forced to evacuate their rightful homes.
Britain is now sick in mind. No right of free speech, no right to demand that the ill educated get some form of education, no say in that the Karen Matthews of the estates cannot proliferate at others expense.
And that cesspit in London called Parliament is still full of the dross of modern Britain whilst the vibrant souls lay their lives on the line in foreign fields for the lies we are expected to swallow. And not a person in Westminster fit to lace Ian CDouglas Smiths' boots.
The Heavens will not preserve us, nor does it look likely that the British People will. Not a Maggie in sight, anywhere!

Amazingly (snark), it never made the local media reports. Had I not read the article here I would never have known about it. Sort of like I would never heard about an old man butchered in his bed two weeks ago if I had not been told about it on the phone on the weekend by my aunt who lives next door to his house.

I am very sorry to hear about the couples death, nobody deserves to die like this but, and here it comes, the British politicians were instrumental in turning South Africa into the hell hole it is today. Britians turn will come with all the immigration and then it will be a case of I told you so.