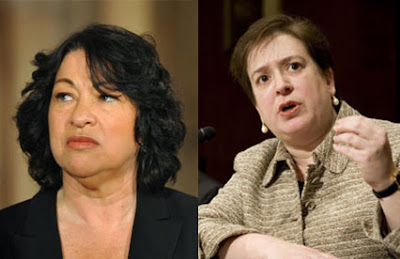 If anyone was in any doubt, following the appointment of Sonia Sotomayor to the US Supreme Court, that Obama had an unfriendly agenda, will have been disabused of that doubt by the nomination of Solicitor General Elena Kagan to replace the retiring Justice John Paul Stephens.

After having first appointed a Hispanic feminist with a history of racist judgement and anti (white) male rhetoric, Obama now seeks to foist another radical feminist on the American public, this time one with a very unfriendly attitude towards the free speech provisions of the First Amendment to the US Constitution.

Elena Kagan is, of course, also politically correct right to the tips of her wide fitting pumps and served as White House Council during the Clinton administration. However, it is her attitude towards free speech and her writings on the subject which will give many pause for thought, Whilst a tenured professor at University of Chicago Law School she published amongst other things a law review article on the "Regulation of Hate Speech”, which she linked with pornography in the manner with which a dishonest politicians will link an agenda driven issue with an otherwise unconnected but emotive subject, so as to merge the two concepts in the public mind.

In this she wrote”"I take it as a given that we live in a society marred by racial and gender inequality, that certain forms of speech perpetuate and promote this inequality, and that the uncoerced disappearance of such speech would be cause for great elation."

Correct me if I am wrong, but isn't the vital importance of protecting free speech amplified when that speech goes against the popular orthodoxies of the day?

Of perhaps greater interest was "Private Speech, Public Purpose: The Role of Governmental Motive in First Amendment Doctrine," an article Kagan also wrote whist at Chicago. Obama's power base, discussing governmental regulation of speech in general. In that article Kagan went further and argued it may be proper to suppress speech because it is offensive to society or indeed to the government.

Once can imagine Stalin nodding with approval at such an assertion

Kagan's name was also on a brief, United States V. Stevens,which chillingly states: "Whether a given category of speech enjoys First Amendment protection depends upon a categorical balancing of the value of the speech against its societal costs."

The US Supreme Court is the highest judicial court in America, it is the final appellate court, its decisions can impact upon US society and beyond for generations.

The fact that Obama's first two nominations for the Supreme court have been such extreme examples of radical feminist, anti male any white pro-affirmative action anti free speech repressive political correctness tells us as much about him and his mission as it does about these two rather unpleasant women.
Posted by Sarah Maid of Albion at 14:19

There is a book that was published back in 1987 entitled "The Wolf of the Kremlin". The subtitle is "The First Biography of L. M. Kaganovich, The Soviet Union's Architect of Fear". William Morrow publisher...

The authors name is Stuart Kahan. The subject of the book, Lazar Moiseyevich Kaganovich, is Stuarts Uncle. The inside end leaf states that the authors aunt was Stalins third wife. All interviews with the books subject in Moscow were conducted in Yiddish.

Further, the inside front leaf states that Kaganovich "personally supervised the deadly purges that ran rampant in the Soviet Union in the 1930's and 1940's....and (he) caused the deaths of twenty million people".

Is Elena Kagan related to this family? I have no idea.

Yes, judging by these all these "George Orwell" caricatures that have arisen from a blank sheet of paper, the White House is truly becoming a house of horrors!

Please remove the pictures at the start of this post, they going to give me nightmares.

yeah she be a dike fo sure.

Her religion and her sexuality are her business. Given the position she is aspiring to her attitude to freedom of speech is everyone's business.

WASPs were the people who carved America out of the wilderness. All you here about them these days is that they were the evil exterminators of the Indians. But it was because of the structures that they put in place on that continent, ( cities, harbours , farms, industry, roads, ) along with the stable society they created that led to Asians, Orientals and indians from central America moving to the USA as well as Irish, Italians, Russians etc not to mention jews. And WASPs pay a lot of taxes these days that help blacks and Mexicans. I think it is every white person's business that the US supreme court has three jews out of nine and not a single WASP.
This is the new world order. Unbelievably ungrateful ignorant evil bastards doesn't even begin to cover it. But the WASPs have been too complacant for their own good. I see Milliband is pushing for the labour leadership. Thats all you need over there.

Unfortunately, Sarah, Kagan's religion and sexuality are her business and she will be guided by them when 'interpreting' the law. You can be sure that those 'interpretations' will benefit her tribe and the perverts. It is very likely that Sotomayer is also one of God's precious pets, which would mean that the Supreme Court has four jews on it out of the nine total, even though they only make up 3% of the population at large. Their arrogance knows no bounds. During their period of control in Russia and eastern Europe they occupied positions of power and influence which were vastly out of proportion to their actual per centage of the population as a whole. As a result, they were largely responsible for the vast slaughter of the Christian population. Since they effectively control the United States they are responsible for the destruction of everything that America once stood for and for the criminal behaviour of the US government. Americans will soon begin to experience what all non-jews experience sooner or later when living under the control of these vampires. A new GULAG will spring up in North America and Kagan and her ilk will be running it.

If it's any consolation Britain has a member of her tribe as the new Attorney General LOL!

One of the most comforting things about her nomination (we have to look for comfort where we can find it) is that she is really pretty dumb. She is a typical Affirmative Action product, just like Sotomeyer, and has never shown herself to be intellectually distinguished in anyway whatsoever. The reason why there is some degree of comfort in this is this: While she and Sotomeyer will be voting as the idiot block in lockstep, they are both to dull to have any influence at all over the rest of the Court. In actual fact, there is a good chance they will alienate the rest of the Court, so that whatever position they support, the rest of the Court will be inclined to oppose just because it will hear such foolishness from these two Leftards. In short, there were other, much more dangerous, truly bright people he might have nominated that could have actually swayed the Court. This woman represents a vote but zero influence.

I say this because she has argued some things before the Court already and has gone down in flames every time. They think she is pretty dull.

Obama is merely exposing himself for what he really is - an anti-white racist.

The signs have been there all along for those who cared to enquire.

This man is dangerous and I predict that he is going to cause much more harm than any president in US history, including Peanut Carter.

"The lie can be maintained only for such time as the State can shield the people from the political, economic and/or military consequences of the lie. It thus becomes vitally important for the State to use all of its powers to repress dissent, for the truth is the mortal enemy of the lie and thus by extension, the truth becomes the greatest enemy of the state"

Just as relevant today in the UK and USA as then.
Dr Joseph M Goebbels