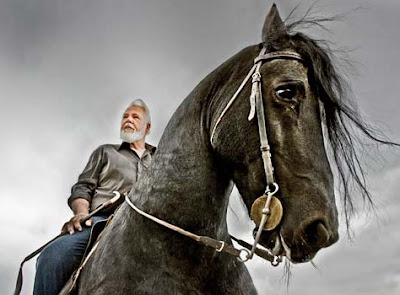 A grisly picture of the killing of right-wing leader Eugene Terre'Blanche was painted in court at a bail hearing on Monday.

The Ventersdorp Magistrate's Court heard he was hacked and beaten with a panga and iron rod 28 times while sleeping - and nearly dismembered.

Chris Mahlangu, 27, a slender man, listened impassively as investigating officer Tsietsi Mano testified how the brutality of the Easter Weekend murder had disturbed him.

"He (Terre'Blanche) was sleeping, so he never saw it coming," said Mano, to murmurs of agreement from the late AWB leader's elderly brother, Andries, who sat with hunched shoulders in the front row of the public gallery.

"The brutality was a bitter pill to swallow - he was totally unrecognisable."

The court heard how Mahlangu, who shielded his face from photographers with his black Nike tracksuit top, bragged about the killing afterwards. The court outlined how Mahlangu and his co-accused, a 15-year-old youth, broke into Terre'Blanche’s farm house outside Ventersdorp, hacked him to death, pulled his pants down and stole his cellphone.

"They struck him several times in his face, head and body with the iron rod and a panga."

After the murder, "they met three people and accused number one (Mahlangu) told them that he is now their boss because they have killed Mr Terre'Blanche",

Confessed several times
The court was told that Mahlangu confessed to the murder several times and that "the evidence against the accused is overwhelming."

Not only did Mahlangu allegedly brag about killing Terre'Blanche to several farm workers, but he also pointed out the murder scene to police and the blood on his clothes matched that of Terre’Blanche.

This led Mano to take him to a magistrate in Klerksdorp where he started making a confession, but was interrupted by his lawyer, Puna Moroko, who burst into the magistrate's office.
Mano read out the report written by the magistrate, Sophia le Roux, who noted that Mahlangu seemed "calm and very at ease with himself".

Also, the report said he did not have any obvious injuries to the body, despite claiming through his Defence Council that he killed Terre'Blanche in self defence.
Click here to read the rest of the story

From Dina and Jennifer
Posted by Sarah Maid of Albion at 10:27

What also came out was that he pulled down ET's pants because he wanted to castrate him. He then decided against it.

The rest ie. the sexual accusations were just people struggling to remain impartial.

Uncertainty about the suspects identity and nationality per the article.

Here is the link to that story http://www.wnd.com/index.php?fa=PAGE.view&pageId=152773

"He (Terre'Blanche) was sleeping, so he never saw it coming,"

Actually, I am grateful for this if the man was to die this awful death. That would be the most merciful way for it to happen.

May his soul, and the souls of all those that die in Christ, rest in the sleep of peace. Amen.

An Afrikaans-language report was also published on April 20 2010 by an experienced, independent African field-tracking investigation team which was asked to survey the Terre’Blanche murder farm in Ventersdorp. The report shows photographs and the findings of this team, Swartberg ISS – a company highly specialised in tracking African veldt conditions and with an intricate knowledge of the secretive ‘traditional African field-writing signposting’ often used by tribal criminal gangs to provide security-information about their intended targets outside the victims’ homes.


The persons who carried out this independent investigation of the murder-farm on 17 April 2010 are internationally-acknowledged experts after many years of studying the secret tribal ‘African field-writing’ knowledge. Their success rate in preventing farm attacks due to this knowledge has been well-documented over the years in South Africa.

Their conclusion: Terre’Blanche was killed by other unknown people who had followed the instructions contained in the marker-trail written in the landscape with traditional African field-writing to the letter. The team concludes that the farm workers who were later arrested at a cottage near the one where the black female farmworker was also killed earlier -- were not the killers but possibly cooperated under duress, for fear of being murdered; and that they would have had to swear an oath not to reveal anything they had seen on fear of death of themselves (or their relatives).

The murder of the black female farm worker was seen as a very important event by Swartberg ISS: she was murdered earlier in a nearby cottage under mysterious and still unexplained circumstances, very close to the cottage where the two ‘suspects’ were waiting for the SAPS to be arrested after the Terre’Blanche murder. click on the link below to read the full story...