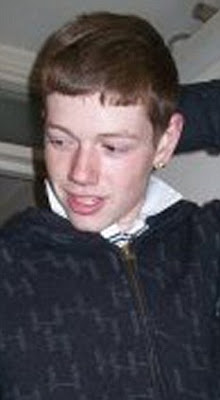 Another innocent victim died last night. 16 year old Nick Pearton lay cradled in his distraught mothers arms after he had been viciously and stabbed stabbed by gang of black youths who had chased him across a park in Sydenham South London, armed with knives and baseball bats.

Bleeding heavily Nick, who had been studying maintenance at college, ran into a shop crying for help, and his mother Kim, who lived nearby was called to the scene.

Nick was pronounced dead shortly hater when he arrived at hospital.

A number of black youths have been arrested and are being questioned.

When this crime was reported in the BBC earlier this evening, as usual details of the race on Nick Pearton's attackers was suppressed.
News source

This horrible situation will continue, and will get worse, until we take our country back.
Posted by Sarah Maid of Albion at 10:40

This is tragic. The BBC once again proves it is a mouthpiece of the Left-wing establishment.

I have seen what is happening in Britain now, happen in Rhodesia, now Zimbabwe 30 years ago.

Let me be clear: It is a subtle Marxist, Communist plot to overthrow your white Christian-centric culture.
They use multiculturalism as their tool.

The roots of what we see are Luciferian in origin.

You need to turn back to your God. Not the church, which is now hi-jacked and a part of the problem, but back to worshipping the Almighty.

Please watch this to see what happened in Rhodesia, which is now finished:

What were his parents doing prior to this? Saying what nice people they are and voting mainstream?