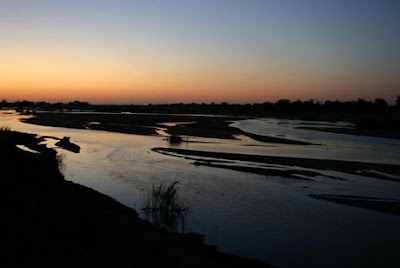 Within a few short hours of reporting the brutal murder of Mpumalanga farmer Tolstoy Schoeman and the attack on his wife, I have been notified of a further fatal attack of a South African farming couple the day before the Schoeman killing.

Mr. Casper Aucamp (55) and his wife Daleen (52), who have a game farm outside Thabazimbi in Limpopo, had been shopping with their three daughters in Rustenburg the previous day. On their return to their farm, Vandas, on Wednesday they were apparently overpowered and murdered whilst busy unloading Christmas presents. Mr. Aucamp's toolkit, which he always had in the back of his vehicle, and a pool of blood at the entrance of the house indicate that on their arrival they were attacked.

Their bodies were found in the boot of the burnt out remains of their vehicle on a deserted gravel road about 25 km outside Dwaalboom on Thursday.

When their parents hadn't contacted them to let them know they were safely home, they began to be very concerned, according to the youngest daughter, Ms. Leonie Mans (24). She had her sister contacted a neighbour to go and investigate but apparently the farm gates, house doors and windows were closed. The sisters went to the farm themselves and asked the gardener where their parents and the vehicle were and were told that they'd gone to buy feed in Dwaalboom.

A family friend phoned and told them that there was a burnt out Land Cruiser on the road outside Dwaalboom. When they arrived at the scene the police were already busy with an investigation. They knew immediately it was their parents' vehicle but only later did the police phone them and inform that there were two bodies in the boot. The sisters identified their parents by their jewellery. According to the police it would appear they were dead when the fire started. The case is being investigated. The police confirm that there was blood found at the entrance to the house, have not yet confirmed whose it was, and as yet no arrests have been made.

As is so often the case, this killing has not, as yet, been reported in the English language media, and I would like to thank Heather for providing the translation of the Afrikaner report which can be found here.
___________
Hat tip: Heather
Posted by Sarah Maid of Albion at 06:25

Another tragic loss. Will those who preach multiculturalism in the West own up to the bloodshed in South Africa?

A bloodshed borne of a hatred for the whites by the ANC marxist terrorists, nay, not a word will be published in the Times, The Telegraph, et al., of these vicious satanic crimes.

Conversely, if a white farmer had killed a black the same newspapers in the UK and the USA would be filled with back-to-back reports with commentaries and more.

We live in the age of deceit.

It just carries on and on and on. You become numb to the news here and that is very sad. You only feel emotions when the very elderly and young get brutally murdered.

Those who preach multiculturalism in the west dont care about white people getting killed their either.
The truth is that our European cousins face the same danger all around the globe.
The only hope for the boers would be to get their freedom.........again.
This time I have a feeling that lots of whites leaving Europe will eventually move to a boer country where they will be able to live in peace.

"We live in the age of deceit" You are so correct, could not have said it better.

" Europe will eventually move to a boer country"

Pardon my ignorance but what and where is this so called boer country you talk about. Please reply and let us know.

I check in every few days sometimes maybe a week at most and the number of murders is astonishing genocidal no less if this was happening anywhere in Europe there would be mass media coverage.

In the last year we had 3 elderly people murdered 30 + housebreakings in a small neighbourhood of about a1000 they tried to steal my vehicle 3 times my wife was hijacked twice and held at gunpoint for two hours on one occasion.

The boers are patient people and have endured a lot , but their situation is deteriorating faster then ever.
The signs of their awakening is there .
I am sure they will seperate from the rest of the country, by that time things in Europe will be equally bad and many Europeans will join.
Many africans will move north once the whites leave and for various reasons opportunity will open up in africa.
If the whites in SA stay on they wont last another 20 years.
The issue that rarely gets discussed in the media is the displacement of south african blacks by foriegn blacks , muslims and chinese. This will eventually cause a violent situation in itself.
The south african blacks have been tormented by the communist and now this. The destruction of their traditional culture is almost complete and this spells nothing good in the long run.
The ultimate weapon of mass destruction is a complete liberal take-over.
The modern concept of liberalism destroys all the good in people and whats left is hate; greed and violence.
It is so sad to see this happening not just to the whites but also to the blacks, despite what the world outside believes many actually dont want to see this happening to blacks either.
I think only rural white south africans and zimbabweans will understand what I am trying to say.
I hope people like kissinger that forced this situation to happen realize what they have done.
But somehow I doubt that, the liberal masters of the universe are a law unto themselves.

It breaks my English heart when I hear about another of these race murders.I don`t know why the whites stay in South Africa.Come back to Europe and let that country descend into the new dark age. I fear that these types of crimes will soon become all to common within the shores of Albion but only if we continue to sleep the slumber of the dammed.