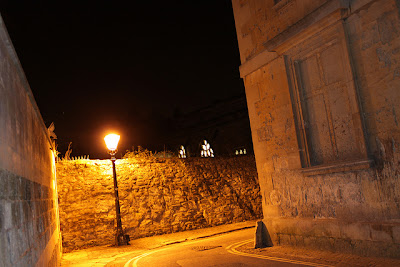 The police in Oxford have arrested a group of thirteen men on suspicion of trafficking under aged girls for the purpose of sex and prostitution.  The men are additionally suspected of grooming the children, supplying them with drugs and also of rape.

These activities have allegedly being going on for at least six years, but it is only now that the police have acted.

This is becoming a familiar story in towns and cities across Britain and invariably they involve the same demographic in terms of offender and of their victims.

However, clinging firmly to their politically correct mandate Thames Valley Police refused to reveal the ethnicity of the suspected gang members, saying such information “could result in victims being identified”.

This is an interesting explanation and leaves one wondering exactly what this could mean.

What it certainly does mean is that offenders cannot possibly be white, as whites are still the largest population group in the country and make up around 84% of Oxford’s 153,000 population, revealing that these 13 offenders are white, could not identify the victims even to a sleuth with the skills of Sherlock Holmes .

Indeed, one has to ask how it would be that revealing that the offenders belong to any of the main ethnic groups amongst the immigrant population, would reveal the identity of their victims, given how many there now are in Britain.

This would only be the case if both groups came from ethnicities which do not feature highly in the British population, for instance if some ex-patriot Mongolians had abused a visiting group of Inuit schoolgirls, or alternatively if they hailed from countries with very small populations, for example if some Kiribati Islanders had been trafficking young girls from Oxfords Tuvalu community.

Doesn’t sound very likely does it?.

What does sound a lot more likely is that the police are lying, and that the only thing which revealing the ethnicity of the suspects will identify is …. Their ethnicity.

thought You may like to keep an eye on this...

Obama said that “if I had a son, he’d look like Trayvon.”

Last tuesday a former Russian banker was shot in London.Operation Trident (black crime) are now investigating the incident.Yet the British media only report on it today.Three days later.I think that you and I know the reason why.

The police also refused to confirm if the offenders were British nationals, which is another pointer to their identity.

With it being Oxford, it's a pity Inspector Lewis is not on the case with his sidekick DS Hathaway. They'd sort it.

Good looking white people from renowned Euro/Scandinavian countries always have been and always will be targeted by Asiatic paedos... Jew, Muslim, Hindu, Sikh - other Arab and off course niggers

Their own lily white asses from being accused of being what they are: incompetetent, appeasing, self loathing,anti-white, race traitors.
This is getting beyond a joke!

Are the court rolls public information?

Is there a reader in Oxford who could stop by the courts, find the information and then expose it on the bloggers world?

The media certainly are not going to do it so it is up to the public who are concerned about these developments to do the work.

IN my efforts to find the Oxford Court Rolls on the www I came across the following article:

At the bottom of the article there is a link to related articles;

How much more evidence does one need that the media is part of a psy-ops campaign to deceive the public?

Spread the word to your circle of influence that we are being brainwashed.

When it's a crime commited by an indegenous Britain. They bring us the news as it happens.

When it's not, they consult.

How much hatred do they have for us indigenous Britons when they won't even protect our children?

And isn't it amazing that the media in Britain, Europe and the US have all followed the same narratives regarding the main stories of this week.

We're witnessing the greatest crimes ever committed against humanity and yet most of the victims are blind to it!

Meanwhile, this has just been posted on the EDL Twitter feed:

So much for "misrepresenting the religion of peace".

This should interest Reconquista -