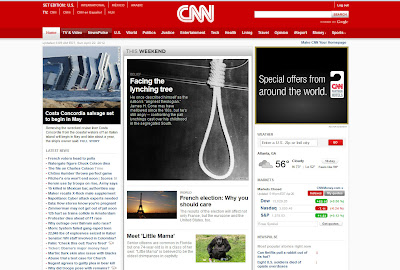 
The above screen grab of the CNN news homepage (US edition) was taken this morning.  It is becoming clear that CNN, together with other US media organisations are determined to cause racial conflict in America, maybe even a race war.  Why else, in the middle of all the hype about the Treyvon Martin shooting would they choose to give the greatest prominence on their NEWS website to an 80 year old story about lynchings in pre-world war II America?

I can only assume that they believe that racial conflict will encourage African Americans to vote for a black presidential candidate in November (Or should that be a white black president given the manner in which ethnicity of the man accused of shooting Martin is now described) and that evoking images of long dead white racists, will shame whites into doing so too.

Given that the world has never yet seen a liberal fantasy turn out as it was supposed to, I suspect that once the monster they are goading is released from its cage, they will find it is impossible to get back under control.

I truly believe they have no idea what they are doing. Where do most Blacks and most liberals live? In the cities. This will backfire very badly on them if they continue stoking the fire.

I am SO ready.

they know exactly what they're doing. This is why it's so evil.

I don't remember where I read it, but it was foretold last year, by a Washington insider, that the "race" issue would be highlighted in this year's U.S. presidential election to ensure that Obama wins a 2nd term.

Thus, the "trayvon" affair was the perfect opportunity to introduce the ploy of highlighting the race issue, even though the "white" hispanic was not quite right, he'll do... because you never know how long the next White shooter will come along.

(I'd appreciate it if other readers could locate that "inside" source, or when more time is available, I'll try to track it down myself.)

Throughout history we can see how people who seek to retain or gain power use whatever seems most appealing to the masses as a tool for their use. Egyptians, Greeks, and Romans saw how large groups of their societies responded to pagan concepts, so the rulers portrayed themselves as gods, or children of gods. When Christianity took off, we can see how the rulers of Europe injected themselves into monotheism - go to the old churches in Europe to see how they depicted themselves as saints or along side angels and God in stained glass windows and paintings. The age of reason changed things a bit, when capitalism and the industrial revolution took off, power hungry people turned to banking and businesses. Democratic governments became prominent powerhouses in the last century and they seek political office. But now with modern communications there are many fronts they can hit, and all interwined. They are searching for the best way to advance their demagoguery - we have environmentalism, class warfare, race conflicts, religious tensions. They will use whatever they can and certainly right now racial animosity in the USA is a fire they need to stoke. They can't unite through constructive reasoning, so they divide and solidify through animosity. Only when the battle is in full swing can they sieze more power - which will come by way of intervention to impose a 'solution' that will include more government control.

and "shame" hispanics into voting for Obama, perhaps?

Blacks will never do anything decent or useful with a big fat chip on their shoulders. They even need degenerate white liberals for their endless whining, begging-bowl crap!

Well said and posted. I have also used the Tuskegee study many times, but the Collectivists act as though it doesn't exist.

I think the site youre thinking of is "theulstermanreport.com", he's had some interviews with two guys, supposedly in the know. He calls them the WhiteHouse insider and wall street insider.

Of course, they are stoking it. They know exactly what they're doing. Obama needs a good crisis to carry him into a second term.

It may have escaped the American people's attention, but Obama recently issued yet another Executive Order, giving himself new emergency powers. In an emergency (as defined ad-hoc by himself), he can now confiscate any private property, and command anybody's unpaid labour. He specifically mentions food supplies. No mention of guns, but he doesn't need to, does he? You have the right to keep and bear arms, you just won't have any to bear. You have the right to eat, too, and much good may it do you when the government confiscates your food.

Next step, martial law, suspension of the Constitution and elections, and President-for-the-duration Obama.

Sounds a bit overwrought, I know. But then, this blatant agitation for a race war is hard to explain without at least some of those purposes.

DailyKenn: Good post, but of course neither Cone nor CNN will ever read it.

I don't know whether anybody else had problems opening that post. I've noticed this on a couple of links that I've clicked today. The linked page opens, then immediately seems to be redirected to limbo. The status bar shows "Connecting to www.google.com", while the browser just hangs. Is this some new way that google has found to censor blogs it disagrees with?

I eventually copied the text in the few seconds it displayed, and pasted into an editor to read it.

According to police records and news reports, Herbert broke into DeVivo's home to commit burglarly, murdered DeVivo, stuffed his body in the trunk of DeVivo's Chevy Malibu and drove him to a river where he disposed of his body. Herbert kept the car and DeVivo's wallet. He was tracked to North Carolina using mapping data and cell tower hits from several cellphones.

• Tennesee - David Martin, 27, was a White pizza manager who was gunned down outside his South Nashville apartment. As Martin returned home after work, he was approached by a black male who pulled a gun and demanded money. As the black thief left with Martin's money, he pulled his own gun and demanded he stop. The robber turned and fired, killing Martin. Witnesses described the black suspect as wearing a Trayvon-style hoody.

• Kentucky - Brett Thornberry, 18, was shot to death. A grand jury charged a 16-year-old black male as an adult with robbing and killing him. Indicted was Romello Rice, a former Holmes High School football player. A black 15-year-old has been arrested and charged with complicity to commit robbery and murder in connection with his death.

• New Jersey - Lena Triano, 57, was found bound, raped, strangled and with multiple stab wounds at her house in 1976. Nearly forty years later Carlton R. Franklin, a black male who has spent nearly 20 years behind bars for kidnapping and robbery since the murder, has been arrested for the crime. Franklin was 15 at the time of the murder.

• Texas - Randall Perkins, 20, was murdered in his home during a gathering of friends. Arrested is a black 22-year-old black male, Leandre “Dre” Vonzell Hill. News reports indicate that Vonzell was an uninvited guest who crashed the party with a group of black companions. Another White man, Paul Benavides, 24, was also shot, but survived.

The above are five of the most recent black on White murders. Hundreds occur each year with little or no media attention.

• Ohio - Matthew Dugan, a 34-year-old White male was shot in the head during a robbery at the former BP gas station. Anthony Belton, a black male, was sentenced to death by lethal injection for the murder.

• Dave Shotkoski, 30, was a White relief pitcher for Atlanta Braves. Shotkoski was killed as he returned to his hotel during Spring training. Neal Evans was charged with second-degree murder. That was due in part to a teammate who was determined to track down his killer. Evans was released from prison ten years early.

Luckily we do not go around seeking revenge for these people who were real murder victims and not a burglar who was legitimaley shot in self-defense.