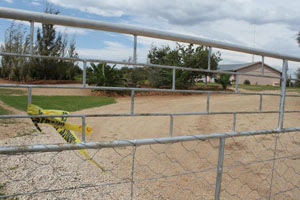 Naauwhoek Farm
Kimberley - A Northern Cape farmer, his wife and daughter were killed on a farm near Griekwastad on Good Friday

Police were investigating a triple murder after the bodies of Deon Steenkamp, his wife Christelle and 14-year-old daughter Marthella were found at Naauwhoek Farm at around 18:00 on Friday. The victims were all shot.

The bodies were discovered by the couple's 17-year-old* son Don.  Censor bugbear reports that  Don found his sister still alive and that she died in his arms 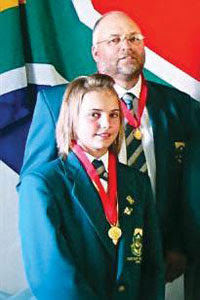 Marthella Steenkamp, pictured above with her father at a school award ceremony was described as “A beloved star” by the principle of the Bloemfontein Girls High School
____________________
Hat Tip: Jenny W and Mulder


*Other reports give Don Steenkamp's age as 15

And at Censor Bugbear
Posted by Sarah Maid of Albion at 07:43

God bless their souls. Again not a word from the disgusting mainstream media in the UK.

And so it continues with the world choosing to ignore it!

As the UN said: "We must never allow it to happen again"

Is there a way you can make your Farm Murders ticker into a single URL so we can paste it into our own blogs andhave it automatically update?

Sorry, I see my earlier comment got through after all.

http://thereligionofpeace.com/ has a ticker that auto-updates with the same URL each time. You should email him and ask him how he does it.

In the meantime, a shameless plug for my recently created blog:

As the UN said:
"We must never allow it to happen again"

For readers not up to speed on this subject:

[1]
During the 42 years (1948-1990) of formal apartheid 7,000 people of all races died at the hands of the security services. (Figure accepted as testimony by the Truth and Reconcilliation Commission)

[2]
In the first 4 years of apartheid free South Africa, between the abolition of the apartheid laws and the introduction of black majority rule (1990-1994) about 14,000 black people died. About 12,000 as the result of black on black violence and about 2,000 at the hands of the security services sent into the townships to keep the warring factions apart. They ended up having to defend themselves from the rampaging mobs.

Right now it seems as if the UN and the silent liberal media have justifiably earned the 'Egg On Your Face" award for their total silence on what is happening in South Africa today.

What a beautifull community of Boers live in Griekwastad , the most friendly and kind people you can find .
The Boers do not deserve this and heaven help those that stand in their way once they go into survival mode.
The world think its the end of the Boers but in those people I have seen a tenacity and spirit no other white folk have.
I pray for them every day.

The Daily Mail were wittering on sacked writer John Derbyshire so I've submitted this comment as Jonno:

"Enough of this "racist" tosh Daily Mail. When are you going to have the intestinal fortitude to report the racial genocide of WHITE Boer farmers in South Africa? Between 3 and 4,000 have been MURDERED since the end of apartheid, many having first been tortured and then mutilated. Three more were killed on Good Friday. You know this is happening and the fact that you are wilfully ignoring this genocide is a testament to your politically twisted wickedness."

To think that those morons in Canada will not give people like this refugee status when they seek it.

One canadian bureaucrat wrote that if someone is not colourless any claim they make will be taken on face value and when he asked his supervisor why this was so he was told that it was policy to believe that people would not lie to them!

One day little Mogadishu in Toronto will prove why it is so named.

It's about time the US, UK, UN and NATO stepped in and intervened in this despotic regime. Why would the ANC regime, a known terrorist organization, be actively seeking nuclear weapons?

This info needs to be shared worldwide and with the MSM.

I note that the Martin / Zimmerman case in Florida received a few minutes of prime time news coverage on UK TV last night. Zimmerman has been charged with 2nd degree murder.

Only the blindest of the blind can be sucked in by this deliberate psy-ops by the UK media: black man good-"white" man bad.

In south Africa between 45 and 50 people were murdered during the day. Amongst them 1 or 2 whites killed by blacks. Not a peep by the UK media.

The articles on other sites about the NWO controlling the global media make more sense every day.