The Henry Webster case and the BBC Censors (Liars) 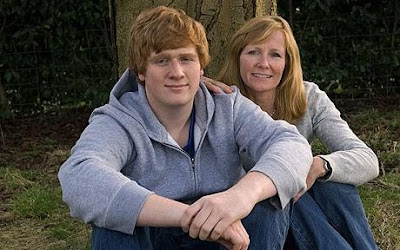 Attack victim Henry Webster with his mother
Unlike the wider public, most readers of this site will be aware of the case of Henry Webster, the schoolboy from Wiltshire who was left brain damaged and suffering from life threatening injuries following a an attack on him by a gang of Asian youths, most of them students from his school. and at least one of whom used a claw hammer on him.

Henry is now suing his school for negligence in allowing the attack to take place. A significant aspect of Henry's case against the school is that they ignored the behaviour of Asian students out of political correctness. Henry and his family also believe that the assault was racially motivated. Therefore, the race of his attackers is relevant both to the attack and to Henry Webster's legal action.

However, this is how the BBC describe the attack in a report today on proceedings in court:

The assault on Mr Webster, who was then 15, involved a group of schoolboys and three car-loads of men who came on to school premises after being summoned by the boys on mobile phones.

Thirteen teenagers, and a man who did not attend the 1,400-pupil school, were convicted for their parts in the attack at Bristol Crown Court last year.

The BBC know that, given how the media in general limited the reporting of the actual criminal case, the majority of the public will know nothing of it, and from this report will have no idea that there was a racial element to what took place. Deliberately misleading and deliberately dishonest.

News censorship in this country is now all but absolute, and it is becoming frightening.

Any society that tolerates this sort of behavior is doomed. The only options are to deport the guilty or to execute them.

As you say, their contempt for the British people has become frightening.

Do they think the Lisbon Treaty will lead to socialism in perpetuity?

I think so. Nothing else can explain it, and without some form of counter-revolution I fear they are probably right.

Frightening how much of this we had no clue about pre-internet.

Without Amren, Vdare, Majorityrights etc. - and infowars on general stuff - I'd know almost nothing about so many things I now consider vitally important.

I believe a relief- or student-teacher has spoken openly about the school management's being paralysed by the race angle to the school's troubles. Brave of her, if she reads this, thanks. I hope her career does not suffer.

In agreement with Dr.D.