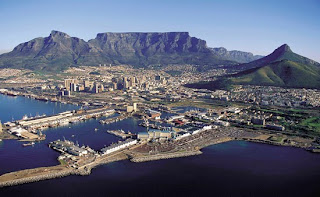 A British tourist has been found dead after being abducted by armed men in Cape Town South Africa.
The 28-year-old victim and her male friend were kidnapped on Saturday when a group stopped their taxi near a major township.

The attackers forced the driver out of the vehicle and sped off with the tourists. The 31-year-old man was released an hour later but the body of the woman was found later in the Lingelethu West area, southeast of the city centre.

The full report on Sky News is here 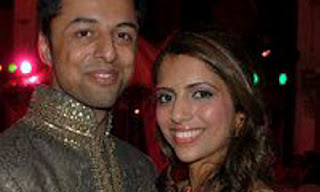 Those of us who wondered why this particular killing received such widespread international coverage, when the brutal murders of whites are usually censored and covered up my the controlled media, may gain a clue to the possible reason from the above photo of the victim and her husband

Before anyone accuses me of applying differing standards to different victims, and assuming the facts of the case are as they are represented, this case is no less tragic than the thousands upon thousands ob murders which occur in South Africa. However, what is tragic, and shocking, is the that it has been given far greater prominence because of the race of the victim.

And our enemies call us racists!

I sent you the link from one of our SA sites. Apparently these were a married couple on honeymoon.

Now my questoin (not what the media spins) is what they were doing in Khyalitsha (a major black township just outside Cape Town).

That place is rotten and even the police do not always go in there unless they go in armoured vehicles.

Being a liberal here in SA makes no difference to the "local previously disadvantaged people". If you are white, you are a target.

I believe the British Government should put places like this on a ban list instead we have the media and the government saying how wonderful they are.

This even made the front page of newspapers in California-we never usually see any mention of the murders in South Africa here.

@anon....this may surprise you, but there are on average 52 murders a day in this "wonderful" country. Unless it is extremely brutal, it does not even make the newspapers here anymore. It is part of life for us.

I hate to say this but under these circumstances one could even be sceptical - it is not uncommon, in the UK, for Asian families (and this was a British Asian couple) to dispose of one of their members in some family tangle even for the insurance.

I would regard this story as suspect until the facts are corroborated by the authorities and the taxi driver has given a full account.

The husband, a multi millionaire, cannot be stupid as he runs a chain of care homes in the West country. He would have been astute enough to appreciate the high risk level in travelling through such an area at that time of the evening.

Let's hope that my suspicions are unfounded and that this is just a ‘normal’ murder which appear to be rife nowadays, in South Africa!

This was the third from top news story this evening. If the couple had been white I very much doubt that would happen.

I just wonder why people are gripping about the reporting of this story.

Most times something makes a story go international. Maybe its the fact that the man was rich.

Have you nothing better to do with your time than sit around debating peoples nationalities and skin colour? You sound like a bunch of old ladies gossiping.

You sound like a total moron who have spent your privileged life wrapped in cotton wool, I hope reality doesn't bite your backside too painfully

Nice one Sarah - welcome back btw and I am glad you are all in good health.

As a white South African, I must disagree with your slant that the reason this issue is receiving such wide coverage is because the victims aren't white. If they were ordinary black South Africans this wouldn't have made the news, if they were white South Africans it might have made headlines nationally. Objectively, this is newsworthy because the victims were wealthy honeymooning tourists from Europe and the murder victim was an attractive female in the prime of her life.

"Moron" says "Have you nothing better to do with your time than sit around debating peoples nationalities and skin colour?"

To quell any dissent among white people who may have objections, or at the very least, also wish to organize themselves into exclusive groups, "white guilt" becomes the weapon used against us while free speech is supplanted by "political correctness".

Any further objections originating from "privileged" white people are shouted down as being "insensitive" or "racist". We then establish "hate laws" against ourselves and are often sent to "sensitivity-training" courses, or even to jail for merely expressing opinions.

I could go on and state more of the obvious ploys of disenfranchising whites in their own countries, but seeing how you have earned "the label"....I doubt you'd understand.

I live in South Africa and i think this murder was all planned.A millionaire man like Shrien Dewani has alot of skeletons in his closet either him or his family.Logically a 5star hotel would provide a shuttle service or a private limo to take them on any tourist locations in CapeTown.Where does a millionaire man find a driver and a stolen shuttle outside a 5star hotel???
If Shrien Dewani knew the B&Bs and popular nightspots why would he use a unmarked shuttle???
Shrien Dewani has family in Capetown and safety anywhere in the world is top priority, so why risk your newly wed wife with such a township shuttle?

´moron´says... south africa belongs to the black south africans.. the rest of you... stop ranting about your ´rights´cos you dont have any and hop it.

This is insane!
can we get over the race thing, really.
i mean really.
no ones life deserves to get taken away. the more this becomes arace thing, the more this womens life is devalued. because it leaves the real subject matter.
way to go to put this on here (the way you delivered it - contradiction the end of your parahgraph- and other stuff)just for the sake of higher approval rates on your blog.
need to know: how do you sleep at night when all you do with your life is recite killing statistics all the time?
I think you suffer from inferiority complexity to some extent, no ofense.

Will anyone be surprised if and when the husband is proven guilty of organising this murder for the insurance?

Look into the details. I can see enough to make me extremely suspicious.

And if anyone thinks 911 also wasn't very probably an insurance job you need to get out more.

Made news in Canada. What caught my attention was her age, the suggestion that it was her new husband and the location. We ALL live in a very sad, upsetting World where really good people are killed everyday, regardless of what nationality they are. We would all be better off to be color blind and also to keep our opinions on religion to ourselves. I like to view other people as being my relatives, people that I respect and care for. These days, well most likely been going on for longer, more and more people tend to have the belief that the World or other people owe them something. We all live on this big rock together, we are all human, we all have a heart and a brain. Beliefs and thoughts aside, you and I are not that different really... we need to start getting along and treating each other with common respect...

Clearly we all feel sympathy for the victim, her family and of course her husband (assuming the current allegations against his prove to be untrue)

However, it has to be asked why this case has made international news whilst thousands of other, often far more violent murders, including those of young brides, young husbands and young children have been covered up by the world's media.

(Translated from Indonesian: I recently came across your blog and have read together. I thought I would leave my first comment. I do not know what to say except that I have enjoyed reading. Nice blog.)