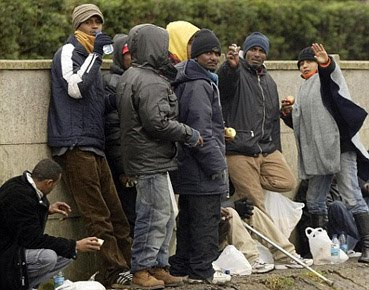 WHEN the European Commission dodged answering a Written Question on mass immigration leading to people becoming an ethnic minority in their own country, Nick Griffin MEP sought clarification by asking a supplementary question.

"The Commission did not respond to my question beneath:

"Does the Commission also welcome the prospect of the indigenous peoples of the nation states becoming minorities in their ancestral homelands, outnumbered by the sum of newcomers who are not native to such lands?’

"The Commission will be aware that the indigenous peoples of the nation states are forecast to become minorities in their own ancestral homelands at various dates well within the current century. Is it that the Commission has failed to answer these questions accurately because of the controversial nature of the answers?"

The Commission responded and this was the answer given by Ms Vassiliou on behalf of the Commission.

"In reply to the written question E-4895/10, the Commission would like to inform the Honourable Member that the 2005 UNESCO Protection and Promotion of the Diversity of Cultural Expressions mainly aims to reaffirm the sovereign right of States to draw up cultural policies and to recognize the specific nature of cultural goods and services as vehicles of identity, values and meaning. It is therefore a tool to preserve cultural identities, rather than to dilute them as the Honourable Member fears.

"Framework Decision 2008/913/JHA on combating certain forms and expressions of racism and xenophobia by means of criminal law aims at penalising, inter alia, the intentional public incitement to violence or hatred directed against a group of persons or a member of such a group defined by reference to race, colour, religion, descent or national or ethnic origin. The European Court of Human Rights has declared that it may be considered necessary in democratic societies to sanction all forms of expression which spread, incite, promote or justify hatred based on intolerance.

"As regards the written question E-4896/10, the Commission refers the Honourable Member to its reply to his question E-2056/10 which summarized its view on the subject.

"The Commission would like to conclude that it does not make value judgements on minority and majority cultures and identities, but seeks to support understanding and tolerance between people. It promotes the integration of migrants for the well being of both migrants and the rest of the population and intercultural dialogue as a means to increase understanding and respect between individuals and groups. Fostering peace, tolerance and understanding between people from diverse cultural backgrounds is one of the fundamental goals of the European Union. The Commission is committed to support and defend such values."

Translation: "Yes we are deliberately ethnically cleansing Europe, but it would be racist to say that's a bad thing"

The EU is clearly set up to hamstring any national effort to resist the immigration invasion.

It is obvious despite the waffle and corporate speak, that the agenda is to try and merge all peoples. Unfortunately they cannot forsee the future as it will actually play out.
They have their blinkered ideas and nothing will get them to look beyond.
I genuinely believe that these people have been systematically brainwashed by the overseeing organisation. Its all very hush hush of course.

Thanks for the translation. I find it profoundly depressing that Ms Vassiliou, who I suppose is Greek, should come out with this poisonous twaddle. Today's Greeks' ancestors, who rose up against 400 years of Turkish/Muslim occupation, will be turning in their graves.

It is the war on whites.

Note they are not promoting immigration into Japan, China etc.

And they don't give a rat's ass about whites in Africa.

They are absolutely determined to screw Europe, North America and Australia.

Please visit the American Renaissance.com blog site and go to their recent book review article entitled "Decline of the West, How the British Destroyed Britain." I'm quite curious what your views are on this book. I personally think that, as much as television, American influence destroyed Britain's moral fiber. What say you?

The insane attitude of the EU apparatchiks will condemn all European cultures to oblivion if something doesn't change soon. I think however, that I can detect something shifting in the public mood here, as well as in the Netherlands and in Germany. The multicultural consensus seems to be fracturing.

Mark Steyn's latest interview with Danish television is well worth viewing for his perspective on the corrosive impact of the post-war attitudes of European elites on the well-being of indigenous European peoples and his prognosis for Muslim demographic change: http://durotrigan.blogspot.com/2010/09/mark-steyn-on-islam-in-europe.html

Surely it must be apparent to everyone that Enoch Powell was dead-on in his "Rivers of Blood" speech.

Interesting that the newly "liberated" black countries of Africa were not or ever have been criticised for rightly rejecting coolies in the 60's. (Kenya and Uganda. There were riots in Durban in 1948) But heyho gullible Britain with it's 'newly' post war Marxist establishment opened its arms to these SETTLERS and STILL does!