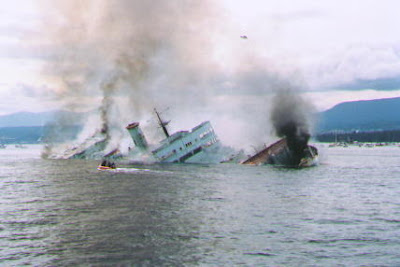 Whilst I’ve been away a lot of things have happened in the world which reveal a lot about where we are.

Over the next week or so, in my return to blogging I will look at a few of these:

Part One- an alliance of two evils

There has been yet another deal by the EU ostensibly to “save Greece”.  “Saving Greece” is  an event which appears to be reoccurring with the same regularity as Irish Referendums, Stephen Lawrence trials, and attempts to rehabilitate Lindsay Lohan.

It is also an event which is no less dishonest, at least than the first two.

Greece cannot be saved and neither can most of Europe and North America without reversing the orthodoxies and deconstructing the political, economic and social edifices which our deluded nations have spent the last half century setting in place.  The brave new world which we have created rings the death knell for the unique, western style egalitarian welfare state which is one of our proudest creations.

For this is the nature of the beast we have created.

The only nations which can thrive and grow in a globalised world are those which are currently growing and thriving, Brazil, India and China, countries with societies not that dissimilar to Tsarist Russia or pre-revolutionary France, with tiny, fabulously wealthy and powerful, elites living in palatial and gated exclusion whilst the remaining 95% of the population struggle in levels of poverty and deprivation of the like we have not seen in Europe, or anywhere in the west for centuries.

These brutal, unequal and divided states, all incidentally net exporters of immigration, are the models for success in a globalised world, whereas we, with our aspirations to equality and multicultural obsessions are not.

Our compassionate, liberal and equal societies can not survive globalisation and they can not survive multiculturalism, it is just not possible as those two malign forces, by their very nature smother and crush those things upon which our societies depend.

That was, of course, the plan, globalisation and multiculturalism are features of a malevolent alliance between the extremes of two seemingly opposing forces, ruthless capitalism and cultural marxism .

Ruthless capitalism of the type espoused by a nationless elite with its global corporations and unremitting calls for more cheap imported labour is the ferocious gale battering against the great and ancient tree which is out nation, whereas Marxism with its joint tools of political correctness and  lying propaganda is the rot gnawing at its roots.

Between them they are draining the power from the nation’s people.

How can Western workers have power, even on a collective basis when we is in competition with people working 15 hour days in unregulated offices for fifty dollars a week or can be replaced tomorrow by people able to work for half his salary because they don’t have a mortgage and are prepared to share a bedroom with five others.

We can not compete freely against such countries while aspiring to pay our people a living wage,  give them a comfortable standard of living, feed them, house them and keep them well.

Add to that the fact that we are importing tens of millions of people who may benefit the rich by depressing wages and disempowering the workforce and benefit the left by undermining the nation state but who’s contribution to society and the wider economy come nowhere close to equalling the strain they place upon it and it is clear that the West is heading for a melt down which any number of national bail outs can prevent.

Greece is just the first of many and her bail out is the equivalent of being thrown a life line from a sinking ship, they may drag her back on deck for now, but we’ll all go down together in the end.

Our current rules can not change from the suicidal path they are on, they are either in the pockets of the super rich or infested with Marxist theory.

Unless we replace the current political elite and reverse the madness of globalisation and multiculturalism which has beset our nations for the last two generations, the economic decline of the West will continue until we become like the deeply unequal societies which globalisation serves so well.  As we can see clearly from the various armpits of the world, it is in those hellholes where ruthless capitalism and Marxism make the most comfortable of bedfellows.
Posted by Sarah Maid of Albion at 06:53

Hello Sarah, so good to have you back!

Yes, the NWO is a hybrid of globalist consumer capitalism + no borders cultural marxism. I've thought this for a long while; ever since the Western capitalists got into bed with communist China. One moment China was the land of savagery wrought by Mao's Red Guards and the Tiananmen Square massacre, the next it was "China is poised to become the next world superpower". The media even stopped calling the capital Peking and it became Beijing.
Yes, by some unholy alchemy known only to those who work behind the scenes in the NWO, global capitalism and global marxism have joined forces. There was an advertising slogan in the 1960's "The revolutionaries are on CBS!"
I expect they still are in places like Hampstead.

This advert from my early teens says it all.

Wow. That was one of the best analyses I have seen for the current state of rot in the White Western World.

One request for you though Sarah, please if you will: it's not really "cultural" Marxism is it? It's "racialist" Marxism.

ps: I'm going back to read this article a second time.

What we have in fact is essentially the sort of state capitalism that they had in Mussolini's Italy and Hitler's Germany. Our current system is neither capitalism nor socialism, bur fascism. It's fascism with a smiling face. The alliance between Big Business and Big Government is one of the key components of fascism. Along with the crushing of dissent, which we also have.

What we have in fact is essentially the sort of state capitalism that they had in Mussolini's Italy and Hitler's Germany.

Well Anon 20:58 you may change your mind when you wake up and see what is really happening

We obviously live under left wing capitalism - the concern for bourgeois leftist social issues mixed with usury and unrestricted capitalism.

Does anyone in the mainstream care about working class whites? Of course not, because people wanting a decent wage aren't in the 'victim' class.

The cure must come from updating traditional social values in religion-neutral rationalist terms (God is dead), together with a return to populism and the replacement of the entire, existing social elite.